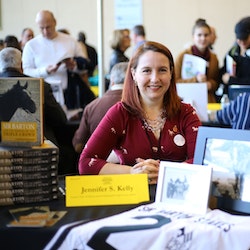 Jennifer Kelly is a horse racing historian, writer, and author of Sir Barton and the Making of the Triple Crown. When she's not writing about racing's past, she's watching and wagering on racing's present, eagerly awaiting our next Triple Crown winner.

The Science of Racing: The Photo Finish Camera

Learn more about this essential piece of racetrack equipment, from the pioneers working with single-exposure cameras and film baths to a filmmaker who developed the system we know today.

Since his sudden death in 1932, Australian champion Phar Lap has remained ingrained in the consciousness of the sport, both in his native land and here in North America.

After the Racetrack: Betty's Bambino

Betty's Bambino has become an essential part of owner Allie Conrad’s life while also demonstrating how versatile a Thoroughbred can be.

True Crime in Horse Racing: The Curious Case of the Missing Mare

Shergar's kidnapping is shocking but not unprecedented: a similar crime happened nearly six years earlier, when Canadian champion Fanfreluche was stolen from her paddock at Claiborne Farm.

After the Racetrack: Scorpiancer

Like The Mean Queen, Scorpiancer, 2017’s champion steeplechaser, has won multiple graded stakes over the jumps at Belmont, Far Hills, and Middleburg, but now this newly retired jump specialist has moved on to a new career as a show jumper. With his new owner and trainer, Rachael Lively, Scorpiancer demonstrates the versatility of the Thoroughbred at any age.

Horses can switch their leading leg, called changing leads, during every type of stride.

Whether they were bribing authorities or intimidating bookmakers, gangsters like the Shelby brothers of Peaky Blinders made the racetrack a dicey place to be for several decades.

After the Racetrack: Zivo and Cherie DeVaux

When you see a former racehorse back on the track with a new job, whether it’s as a public figure or ponying young horses, the versatility of the breed is on full display.

Here are 10 of Secretariat’s best broodmares, including two names that you will find in the bloodlines of two more recent champions.

Science of Horse Racing: The Stride

Let’s look at the particulars of the stride and how horses move at each gait.

From baseball to horse racing, Arnold Rothstein played a role in some of the more dubious sports moments of the early 20th century.

After the Racetrack: Whitmore

Now retired, Whitmore is looking for a new job and trainer Ron Moquett and his wife Laura have plans for 2020’s champion sprinter.

The measuring stick for a great thoroughbred is not just their performances on the track, but also their ability to pass those talents on to the next generation.

General George Washington wanted something simple for the men serving with him in the Continental Army. He sought a way to recognize “any singularly meritorious action” by a soldier, an insignia that rewarded loyalty and valor and encouraged others to the same. With that in mind, on August 7, 1782, Washington created the Badge of Military Merit, a purple heart-shaped patch to be displayed on a recipient’s uniform. Nearly a century and a half later, another legendary general, Douglas MacArthur, took a cue from our first President and revived this award in 1932, calling it the Purple Heart.

More Than One Way to Wear Roses

Ron McAnally built a Hall of Fame career training superstars like John Henry and Bayakoa and sent 10 horses to the Kentucky Derby over his 50-year career. Though fourth place is his best finish as a trainer, as co-breeder of leading contender Rock Your World, McAnally is a rarity Derby history. He follows in the footsteps of another legendary breeder/trainer - the “Wizard of the Turf,” John E. Madden.

One Hundred Years Ago, Colonel Bradley Goes for the One-Two

A century ago, the Kentucky Derby was blossoming into the Run for the Roses, America’s most famous horse race. Names now iconic in Derby history contributed to its growing popularity, these humans and horses synonymous with cascading blankets of roses and icy cups of mint juleps: Regret and Exterminator, Harry Payne Whitney and Colonel Matt Winn. In the 1920s and 1930s, another Kentucky colonel added his name to that list, Edward Riley Bradley.

A century ago, January 21st saw racing in the midst of its yearly changing of the guard, the champions of 1920 giving way to their successors.

So Nice He Did It Twice: Carry Back’s Two Careers

Carry Back’s tenacity and toughness showed us all why he was such a beloved figure in horse racing in the 1960s and beyond.