Week 4 of the NFL season is creeping up on us. That will mean a fourth of the season is over! I’m already getting teary. Today, I’m going to make picks for the QB Throwdown, RB Rushing Roulette and WR Downfield Threat. Each EasyScore Pick’em game focuses on one position. There are three tiers from each position to choose one player from. So in the end, you’ll have three players on your team, either QBs, RBs, WRs, TEs or even Kickers!

QB1: Peyton Manning: I think you would be sent to the psych ward if you were too not use Peyton Manning against the Philadelphia Eagles. The Eagles have given up the seventh most fantasy points, the sixth best completion rate (67.2%), and the fourth most passing yards. Oh, and Manning is averaging 381 yard passing and four touchdowns a game. What? You heard me.

QB2: Tony Romo: Romo has been somewhat conservative this season, which has cut down on his big numbers, but has also made him more efficient. He is second only to Peyton Manning in completion percentage and just threw three touchdown passes against the Rams. This week he faces the San Diego Chargers who are first for the most fantasy points passing yardage given up to opposing quarterbacks.

QB3: Terrelle Pryor: Pryor is quickly turning into a real quarterback before our very eyes. Last week in Denver he completed 19 of 28 passes for 281 yards, a touchdown and no interceptions. He added four rushing attempts for 36 yards. This week he gets Washington who gives up 357 yards passing and 2.67 touchdowns a game. 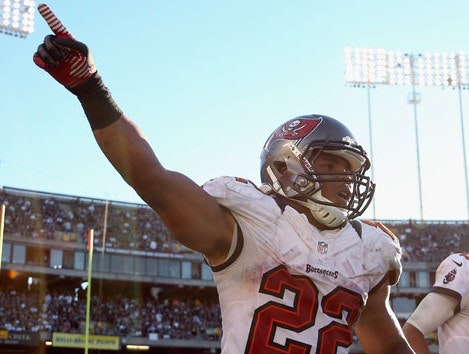 RB1: Doug Martin: Martin is currently second in total rushing yards and this week he’ll have Mike Glennon as his new quarterback. They will rely on the run with the rookie in there. I would go with LeSean McCoy in this spot, but playing at Denver I have a feeling they will be behind quickly and will have to go to the air more and only rushing yards count in this contest.

RB2: Alfred Morris: I’m going to give Morris one more shot. He’s the perfect player for this format because he doesn’t waste his energy on receiving yards. Oakland isn’t going to put up big numbers fast, which should allow Morris to get plenty of carries. Oakland is giving up 96.3 yards rushing per game at 4.3 yards per carry.  Washington will want to get Morris going after a slow start to the season.

RB3: Frank Gore: On Gore’s first four carries of last week’s game he ran for 7, 22, 11, and 21 yard gains. But then they went away from him and he finished with 11 carries for 82 yards. Great numbers for just 11 carries, but not nearly enough carries. Gore had some choice words for his coach and there’s a good chance he gets more than 11 carries this week against the Rams.  And the Rams just gave up 175 yards rushing to DeMarco Murray.

WR1: Dez Bryant: Calvin Johnson is the obvious choice here, but he does face off with the Bears and Charles Tillman. He could easily put up big numbers in Chicago, but I like the possible shootout in San Diego more.  The Chargers are giving up the second most yards to wide receivers with 238.7 per game and the third most receptions with 16.33. Miles Austin may be held out of this one as well, which would mean even more looks for Bryant.

WR2: Pierre Garcon: It’s hard not to go with Julio Jones since he’s been unstoppable, but he has a matchup with Aquib Talib and Bill Belichick who loves to take out the opposing offenses best player. That leaves me with Pierre Garcon. Robert Griffin III loves targeting him. He is one of just three receivers with 10 or more targets in each of the first three games. And Oakland is allowing the sixth most yards to wide receivers and the ninth most fantasy points.

WR3: Eric Decker: Peyton Manning has targeted Decker 28 times this season, which is tied with Demaryius Thomas for the team lead. They face the Eagles, so it all depends on whom Manning targets as far as who gets the yardage.