Week 7 of the NFL season is fast approaching and it’s time to take home some cash monies in the QB Throwdown, RB Rushing Roulette and WR Downfield Threat. Each EasyScore Pick’em game focuses on one position and gives you three tiers from each position to choose from. So in the end you’ll have three players on your team, either QBs, RBs, WRs, TEs or even Kickers!

QB1: Peyton Manning: Everyone and their dog will pick manning in this one and for good reason. This is his first return to Indianapolis after a hall of fame career with them. Owner Jim Irsay is adding a little fodder for the flame, at least in many minds, with his comments, but I don’t think Manning needs much motivation to play well against his old team.

QB2: Jay Cutler: Washington is giving up 292 passing yards per game and Jay Cutler has averaged 312 yards per game over the last three games. The Bears defense hasn’t been great this season, so Washington should be able to put some points on the board, allowing for more need for the Bears to keep throwing.

QB3: Andrew Luck: If Luck would just throw the ball he could be putting up huge numbers, but Ol’ Pep Hamilton wants a balanced offense. That may work in real football more often than not, but this week he takes on the Broncos who average 44.2 points per game, which means they are also giving up quite a few points and yards per game because opponents know they have to score often to keep up.  They’ve yet to hold an opposing team to less than 297 yards and this game has plenty of shootout potential. 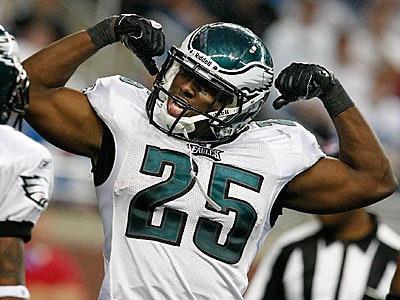 RB1: LeSean McCoy: Shady leads the league with 105 rushing yards per game and the Cowboys give up the ninth worst yards per carry against running backs at 4.3. The Eagles are committed to the run and McCoy is always a safe play in this game since it is based on rushing yards only.

RB2: DeAngelo Williams:  Williams is the perfect kind of running back for this format since his fantasy value is often cut off at the knees by his lack of touchdowns but here, his usage in the running game is worth as much as any other backs. And this week he gets to face the St. Louis Rams who are giving up 127.3 yard and 4.7 yards per carry to opposing running backs, which is the worst in both categories.

RB3: Lamar Miller: This is the riskiest pick here, but I love the matchup and Miller’s snap count last week. Last week Miller played on 45 of 59 snaps compared to Daniel Thomas’ 11 of 59.  It looks like the Dolphins have given him the keys to the car and now he faces a team that allowed 86 yards rushing to Benjarvus Green-Ellis and 72 yards to Willis McGahee, not to mention 149 yards to Bilal Powell. They were able to stop an injured Ray Rice, but for the most part they are getting killed by opposing backs. On the year they are giving up an average of 109.7 yards rushing, the third worst in the league, to opposing running backs.

WR1:  Dez Bryant: The Eagles average 314.5 passing yards allowed per game along with 13 touchdown passes to wide receivers. Last week, rookie Mike Glennon threw 26 of 43 for 257 yards, two touchdowns and one interception and had his second best receiver missing for the game. Bryant had a down game last week versus Washington and he’ll be looking to get back on track against the weak Eagles secondary.

WR2: Victor Cruz: The Vikings are giving up 192 yards per game to opposing wide receivers and 319 total passing yards to quarterbacks. Cruz has been in a mini-slump and Eli Manning has been in a sinkhole slump, but the Vikings at home make for a great matchup to get back on track.

WR3: Justin Blackmon: Blackmon has been on fire since returning from suspension and will get another good matchup against a suspect secondary as San Diego travels to the east coast after a Monday night game. Cecil Shorts may play in this game, but if he does he won’t be 100%. This will be Blackmon’s game and he should once again see 10+ targets.