Week 8 of the NFL season is fast approaching and it’s time to take home some cash monies in the QB Throwdown, RB Rushing Roulette and WR Downfield Threat. Each EasyScore Pick’em game focuses on one position and gives you three tiers from each position to choose from. So in the end you’ll have three players on your team, either QBs, RBs, WRs, TEs or even Kickers!

Peyton Manning: Trying to go with someone other than Peyton might work, but why risk it. He’s averaging the most yards per game with 366. Washington’s offense has been better of late and should at least put up some sort of fight.

Matthew Stafford: Stafford has been on fire lately and of course Calvin Johnson has a lot to do with that. This week they are set for yet another shootout, this time against Dallas. Last week everything was set up for a shootout in Philadelphia against Dallas’ suspect pass defense, but Nick Foles failed us. This week I doubt Stafford and Megatron fail us. He may not be Aaron Rodgers or Peyton Manning in his efficiency, but he will throw the ball a ton and that is good news in fantasy.

Eli Manning: Manning killed me last week, but that was mostly due to the Vikings having absolutely no offense, which led to way too much Peyton Hillis. This week the Eagles will have Michael Vick back and should have a better time moving the ball, which will allow Manning to throw the ball against their weak pass defense. 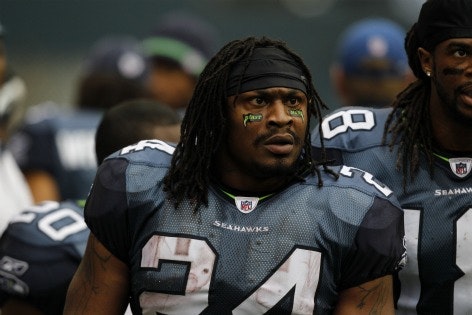 Marshawn Lynch: Lynch is my number one running back this week. He faces one of the worst rushing defenses in the league on Monday night and all systems are go for Beast Mode to appear. The Rams are giving up 120 yards a game to running backs at a 4.4-yard per attempt clip. Add that to the Rams inability to get any kind of lead with Kellen Clemens and Lynch should see plenty of productive snaps.

Eddie Lacy: Lacy has stepped up in the absence of Randall Cobb and James Jones and should get plenty of touches against a Minnesota team lacking much offense. In the last three games he is averaging over 22 carries and 100 yards rushing per game. Minnesota is no slouch against running backs this season, but with the threat of Aaron Rodgers they won’t be able to stack the box and it should give Lacy some room.

Le’Veon Bell: Bell had 19 carries last week against a tough Baltimore defense and totaled 93 rushing yards. Oakland has been about middle of the road against running backs this season, but it looks like the Steelers are going to continue giving him a load of attempts and in this game that is a necessity.

Calvin Johnson: Megatron is back and healthy and is ready for a shootout in the dome against another high-powered offense. Johnson is matchup proof as shown by his 50-yard touchdown reception last week in triple coverage. This game is going to be high powered with Johnson and Dez Bryant trying to one up each other.

Pierre Garcon: The other game I’ll be mining for fantasy points this week in Washington at Denver. We know Peyton Manning and company will be able to move the ball and that will necessitate Robert Griffin throwing a bunch of passes and you know who he likes to throw the ball to. Garcon should see double digit targets in this one and Denver is allowing the third most receiving yards to wide receivers this season.

DeSean Jackson: Jackson was shut down last week with Nick Foles losing his accuracy, but Michael Vick should be back this week and facing a Giants team he went for 132 yards against just a few weeks ago.