Below you will find some players I’ll be starting this week where I have a chance. They each have plus match-ups and hopefully can take advantage. 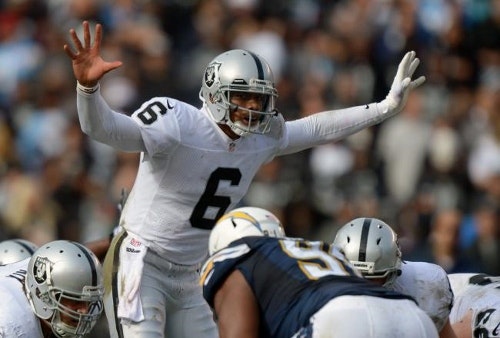 Terrelle Pryor: Pryor should be all set to go after a week off after being very close to playing post-concussion, and he gets the San Diego Chargers defense in a great matchup. They are giving up the most fantasy points per game to quarterbacks and Pryor just came off a good passing game in Denver where he threw for 281 yards and a touchdown. The Chargers offense will be able to score on the Raiders, which will keep Pryor passing.

Eli Manning: The guy has been fairly terrible, but we know he’s not Blaine Gabbert reincarnate. He put up huge numbers against Dallas week 1 and was just a few dropped passes away from having a decent game against the number one pass defense in Kansas City. This week he gets to go home to face the Philadelphia Eagles who have the 31st ranked pass defense and are allowing 340 yards per game passing. Eli should be able to turn things around this week. 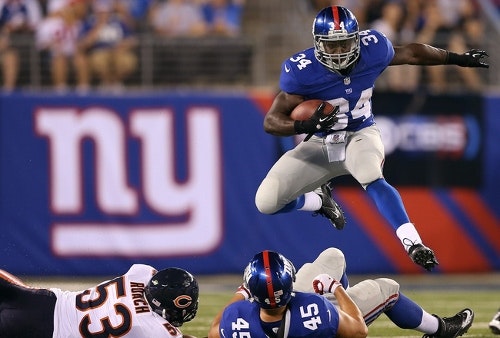 David Wilson: This season has been a sad one for David Wilson and anyone using him in fantasy football, but it looks like we’ll get another shot at a good matchup for Wilson as the primary ball carrier now that Da’Rel Scott has been let go. He faces the Eagles who are ranked 26th versus the run in what should be a high scoring affair.

Eddie Lacy: The Packers running back will return this week from a concussion he received in week two against Washington and gets a Lions defense that has given up the third most fantasy points to opposing running backs this season. This game should be a barn burner and Lacy is trusted in pass protection, so should remain the main back even though Johnathan Franklin put up big numbers before the bye.

Maurice Jones-Drew: MJD can’t ask for a better matchup this week. The Rams are getting completely gashed by opposing running backs with 203 yards to DeMarco Murray and 153 to Frank Gore over the last two weeks. On the season they are giving up 134 rushing yards per game. Yes, the Jaguars are awful, but MJD got into the end zone against the Seahawks in Seattle, so there is a good chance for at least a touchdown and then some decent yardage, but MJD is looking to rebound here in a big way to help himself in contract negotiations.

Denarius Moore: I’m afraid of Moore’s inconsistency, but his upside is great and his matchup with San Diego is also great. The Chargers are averaging just over two sacks per game and that lack of pass rush is perfect for Terrelle Pryor to find time to let Moore get open. The Raiders defense will be hard pressed to stop Philip Rivers so will most likely be throwing the ball often against a team who has given up the fifth most fantasy points to wide receivers.

Jeremy Kerley: With Santonio Holmes and Stephen Hill most likely out, Kerley should see plenty of targets and he’s a very good possession receiver. His upside is capped, but as the main target he could easily put up a good game against the Falcons who allow the fourth most points to opposing wide receivers.

Terrance Williams: This Denver/Dallas game should yield a ton of passing yardage with the Cowboys most likely trailing and trying hard to keep up. With Miles Austin out once again Williams should draw the start and see plenty of targets as Denver tries to mitigate Dez Bryant’s big play ability. 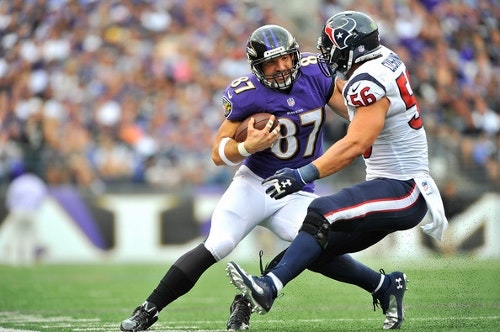 Dallas Clark: What am I saying!? Clark has looked old, but he’s still getting the second most targets for the Ravens behind Torrey Smith.  The Dolphins on the other side of the ball have allowed a league high six touchdowns to tight ends through the first four games.

Brandon Pettigrew: BP sometimes plays like he has an oil spill on his hands, but with Nate Burleson out last week he saw an uptick in targets and caught all seven of them. The Packers/Lions game is going to be a catch up game for both teams most likely and Pettigrew should see plenty of targets once again

Julius Thomas: The Dallas Cowboys were just roasted by Antonio Gates to the tune of 10 receptions for 136 yards and a touchdown and now they lead the league in tight end receptions allowed. Thomas was quiet last week and missed out on a touchdown for the first time on the season, which means Peyton Manning will give him a cookie or two.