Week 10 of the NFL season is fast approaching and it’s time to take home some cash in the QB Throwdown, RB Rushing Roulette and WR Downfield Threat. Each EasyScore Pick’em game focuses on one position and gives you three tiers from each position to choose from. So in the end you’ll have three players on your team, either QBs, RBs, WRs, TEs or even Kickers!

Philip Rivers: The Chargers will be playing from behind in this one and Rivers isn’t going to be able to milk the clock to keep Peyton Manning off the field like he did with Andrew Luck a few weeks back. The Broncos pass defense is improving with their stout pass rush, but Rivers has been getting it done with a quick release all season and has been able to avoid pressure.

Jay Cutler: Cutler has made a quick recovery and will face the Lions this week. The Lions pass defense has been getting beat for much of the season. Andy Dalton lit them up for 372 yards in Week 7 and Cutler threw for 317 when they met earlier in the season. The Bears offense is clicking and Cutler should get his in a high scoring game. 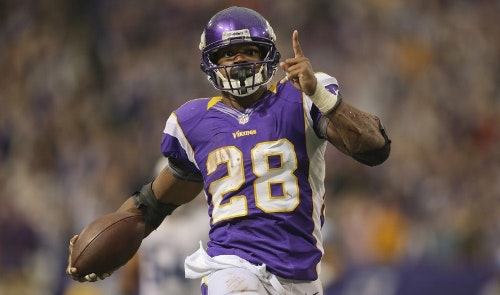 Adrian Peterson: Tonight’s game should see a ton of Adrian Peterson. Last week he looked back to form with 140 rushing yards and Washington is allowing 98.4 yards rushing per game at a 4.3 yards per carry clip. I have a feeling Peterson has a huge game.

Chris Johnson: I know it’s hard to trust him, but coming off his best game in a long time he faces a Jaguars team with the worst rush defense in the league. They are giving up 129.9 yards rushing per game to running backs at 4.7 yards per carry. Johnson will continue to lose goal line looks, but that’s not a problem in this game since yardage is the only stat.

Zac Stacy: It’s so nice to have a running back that plays on every down and gets a ton of work. The Colts run defense is about in the middle of the pack but they are vulnerable and you can’t go wrong with a player averaging 26.5 carries over the last two weeks.

Calvin Johnson: The Bears held Megatron down in week four to 44 yards, but it’s nearly impossible to stop him twice.

Antonio Brown: The Bills give up 204 yards per game to wide receivers, which ranks them 30th in the league. Antonio Brown averages over ten targets per game and leads the league in receptions. He’s about as solid a play as you can get.

DeSean Jackson: Will we get good Nick Foles or bad Nick Foles this week? I’m banking on good Nick Foles and with this motley crew of receivers he stands out as the best. The Packers pass defense is middle of the road and they have little pass rush with Clay Mathews out. I like Foles and Jackson to hook up for a couple big plays.