I love both harness and greyhound racing. From what I can tell from talking to my friends and acquaintances and from what I read online, I'm in a minority on this. Most people are either/or when it comes to standardbreds and greyhounds. Frankly, I'm puzzled as to why this is. There are so many similarities between the two sports. Greyhound races usually have 8 dogs. Harness races usually have 8 horses. Except for the difference in distance between sprints and routes, all the races at a greyhound track are at the same distance. So, every dog races that races in a sprint at Bluffs Run, for instance, will run 550 yards. 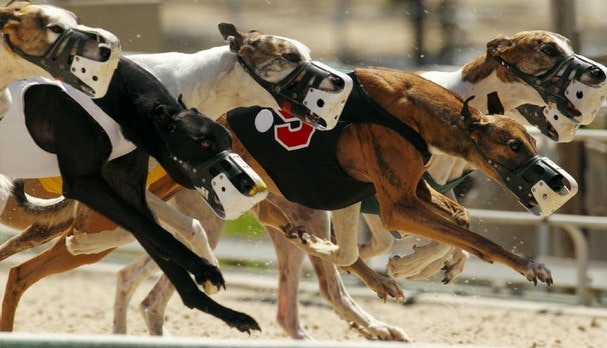 For harness horses, every race at Harrah's Philadelphia will be one mile long. It's standardized and that makes it a lot easier to compare horses' times and fractions, as far as I'm concerned. Unlike thoroughbred racing, where races may range between 5 furlongs and a mile and a quarter, dogs and harness horses stick with only one distance at a track. Harness races don't have as many different variables as thoroughbred racing and greyhound races have even fewer. Once you've looked at the driver and trainer for harness, and the kennel for greyhounds, you've pretty much covered the connections.

And the same factors that matter in harness races, also matter in greyhound races, so if you can handicap one, you can handicap the other without too much of a learning curve. I started, way back in childhood, with harness and thoroughbred racing, because that's what my family was interested in and there were tracks of both kinds where I grew up. It wasn't until the 70's when I went to my first greyhound race that I got hooked on the dogs. To me, it wasn't that big a change from handicapping harness races, except that I didn't have to worry about drivers or whether it was a trot or a pace. I didn't realize, at first, that many people who play the harness races look down on greyhound racing and consider it less than a sport. Some people tell me that it's not really racing, because the dogs don't have anyone guiding them or using strategy, like the horses do.

That doesn't make a lot of sense to me. Greyhound races are contests, just like horse races are. One dog will prevail over the others and if you predict which one, you'll cash a ticket. That sounds like racing to me. Some people told me that they can't get into dog racing because it doesn't have the history and stakes races that harness racing has, like the Little Brown Jug and Hambletonian. I find it hard to believe that people play harness races all year, because of the stakes races. Yes, it's nice to watch the 2 and 3 year old sire stakes that take place over the course of the season, but if they didn't exist, I'd still play the harness races. I suspect everyone else would too.

Of course, we need them to produce future standardbred runners, but they're not why most people play the harness races. I think that, for many people, playing harness races is something they got into because their parents took them to the track when they were young, or because there was a harness track near their hometown. Like me, they didn't even get exposed to greyhound racing when they were young and impressionable. To those people, I'd say, give it a try. Download some free greyhound programs and watch some races online at Bet America. See if you can pick some winners, using some of the techniques you use for harness racing. Early speed and closing ability matter just as much at the greyhounds as they do in harness racing. Ditto for post position. The rail is just as hot at some dog tracks as it is at half-mile harness tracks. I think if a lot of harness players gave the dog races a try, they'd find that playing them would give them another option in their wagering arsenal. Goodness knows, we can all use as many options as we can get when we're trying to make money on racing of any kind.