I've been experimenting with some new handicapping techniques lately. Nothing radical, but I don't think it hurts to change up your handicapping methods from time to time. I've been playing different tracks too, ones I don't usually play. I felt like I was getting stale, playing the same old tracks in the same old way, so I changed my tune, so to speak.

We all need to break out of our comfort boxes once in a while, but I'm not going off the rails. I'm still looking at the same factors that I've always looked at in greyhound races. Speed, class, post position, running style and probable first to turn dogs. After I've done that, there's something else I look for.

I thought of it when I was handicapping a thoroughbred program. I use the Trackmaster past performances and always check the horses' running style to see if it gets a plus or two pluses for the race its in. The plus means that the horse's running style gives it an advantage in this type of race. The double plus means that it has an even bigger advantage.

One of the things I look for is a race where there's only one horse with early speed and no big closers. That's something I look for in dog races now too. I don't find as many of these races at the greyhounds as I do at the throughbreds, but they do happen.

Early speed is good, but sometimes it's more important to have that closing kick at the end of the race. Races with a lot of early speed that's going to burn itself out and allow a closer with energy left to close in the stretch, for instance. Look for races like this with a third or fourth favorite that can close.

If you stick with the top four odds dogs and find a scenario where they benefit more than the favorite or second favorite, you can make money. It's more likely that the third or fourth favorite will come in, rather than a big longshot, but they can still pay well. 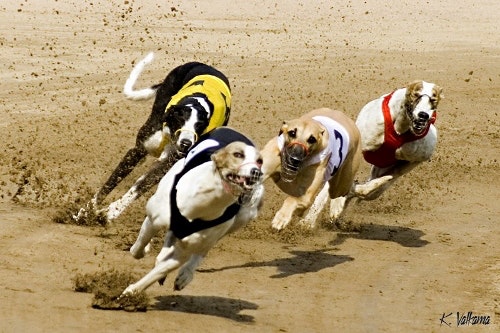 I had the fourth favorite in a sprint the other day, where all but two dogs were breakers that had a habit of fading in the stretch. The fourth favorite was one of the closers and had won at this level before. The other closer was a puppy in a bad post position and with a running style that looked like he'd be buried on the turn. He was and the other closer passed the faltering leaders in the stretch and won at 5-1. I got a nice payoff.