I play online almost exclusively, so where the track is makes little difference to me. What makes a track my favorite is the quality of the races and the caliber of the dogs. Tracks go up and down in my estimation a little, because quality ebbs and flows a bit as the racing season waxes and wanes.

Dogs go into and out of form. Stakes races affect the makeup of the races and the way the track is maintained. Few would argue that tracks are faster when stakes are going down. Kennels have to contend with injuries and sickness and the normal worming and health maintenance that can affect their dogs' performances.

Right now, my three favorite tracks are Bluffs Run, Southland and Dubuque, with Orange Park running a close fourth. Since Dubuque is ending its season soon, I'll switch to Orange Park instead then and also re-evaluate my list of favorites. 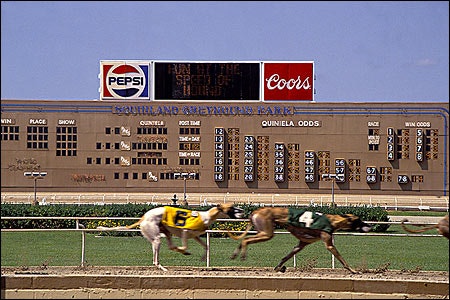 I like Southland because it's not just a speed track and I can play closers and have them hit the board very often. I like races where the winner isn't determined on the first turn. The caliber of the dogs there is first rate, I think, and the kennels are professional and very competitive. I've enjoyed the recent stakes series there.

Bluffs Run has some very good young talent running, as evidenced by its recent Juvenile Stakes series. Watching the likes of SH Avatar, Boc's Sluicey and DK's Flow Meter run is equal to watching any of the past masters of the track that I've seen. It's nice to know that new talent is stepping up to take their place with the best of the past. 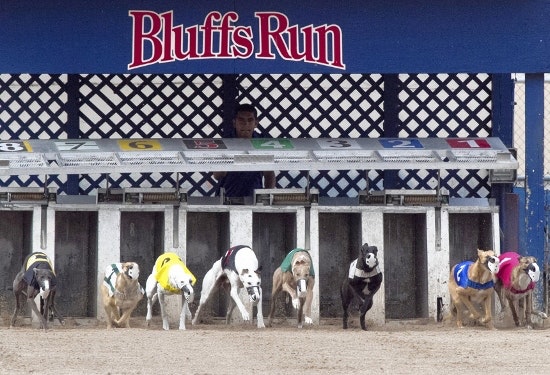 Bluffs Run is one of the few tracks that offers a free tip sheet and it's pretty good at picking a few winners on most programs. I'm not big on tip sheets, but I read this one and take its top selections seriously. If one of its top dogs is much higher in its standings than the others in a race, it very often hits the exacta.

Dubuque, which ends its season on October 27th, unfortunately, also has a wealth of information on its web site and some very competitive races. Early speed is king here, usually, so that's how I handicap sprints and I've done pretty well over the last season.

Something that you have to consider when you play Dubuque is Superior Kennel dogs. Superior Marine just won the Future Stars Stakes there and two of his kennel mates, Killer Carew and My Motors Runnin came in 4th and 3rd. The kennel has won over $190,000 in purse money this season, followed by Boeckenstedt Kennel with $157K plus.

I'm not saying that I never play any other tracks. I do. I look at every track's program almost every day and choose the races that look like ones that I can handicap best. If there's a good route race at Wheeling, for instance, where I do well at route races, I'll play it and maybe look at some other races there too, since I'm "in the neighborhood" so to speak.

But I find that I do best if I stick with three or four tracks that I can really follow. This way, I can get to know the kennels, the way the races are set up and - most of all - the dogs. The older I get, the harder it is for me to retain big chunks of information. By sticking with these favorite tracks, I find that I can remember enough to handicap successfully enough to make a profit.