Summer is fair season and in many states, fairs mean harness racing. And even though very few of the fairs show up online for wagering purposes, the wise handicapper knows that they can't be ignored. Why? Because the horses that run at the fairs will show up on your program later on in the year.

True, there are a few horses that ONLY race at the fairs, year after year, but most of them also race at the tracks in their state or in other states. So if you play Northfield, you'd better look at the results for the 65 fairs with harness racing in Ohio. It's the same for Mainers who play Bangor and Scarborough, my local tracks. Which is why you could find me at the Union Fair last Tuesday, munching fair food and wondering whether The Campbell Kids, Drew and Heath, would be the exacta with A Little Naughty and ER Made Of Honor in the 4th race. (Gary Mosher and Canaco Oneida put the kibosh on that when they placed, with the Campbells coming in first and third.) 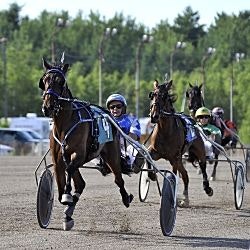 These horses run at Bangor and Scarborough and at the other Maine fairs, and I need to keep an eye on them so I'll know what kind of form they're showing when I see their names on the programs. I also keep an eye on which drivers are doing well at the fairs with which horses and trainers. Both the drivers and the trainers will be stabling their horses in the barns at the two Maine tracks I play come fall.

Kids love fairs and grownups feel like kids when they get on the ferris wheel or take a bite of cotton candy while some guy on stilts walks around in an Uncle Sam outfit. Some horses perk up at the fairs and enjoy the change of pace from their regular routine. Horses are very curious and easily bored. But some are the nervous type and easily spooked.

While some enjoy the hustle and bustle of the crowds at the fair and the sounds from the midway, some horses are bothered by it and don't do their best. But get them back to the tracks they're familiar with and into their old racing rut and they turn from longshots based on their fair records to a contender to be reckoned with. I know of at least four horses that do very little at the fairs and look bad on the program when they turn up at the track, but that come in within a race or two. You should look for horses like that too, so that you can cash in when they run at your favorite track.

It may be August, but fall is just around the corner, with a lot of good harness racing still ahead of us. Horses that started their season at the fairs round into form as the fairs wind down. As people go back to work and school from their summer vacations, the horses go back to their barns and to jogging around the tracks they're most familiar with. Make a note of horses that did well at the fairs and leave room to write down how they do when they switch from fairs to tracks. Remember that some trainers use the fairs to condition their horses.

Standardbreds have long careers. Ones that prove themselves to be flexible enough to excel both on the track and on the fair circuit will definitely be showing up on your handicapping radar for years to come. Keep a list of the horses that can move from track to fair and back again, so that, come fair season and afterward when they move to the track, you'll be ahead of the crowd that only knows what they did at one venue or the other, not both.