Harness Handicapping - Another Way To Handicap For Class

As well as the harness races, I handicap greyhound races. One of the advantages with dog races is that the races have a grade. It's an actual letter grade that tells me what I can expect from the dogs in the race I'm handicapping, and also tells me what grade or class each dog ran in its 6 previous races. 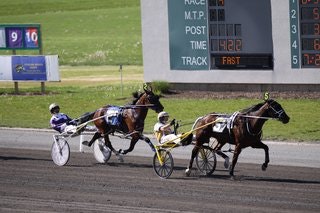 With rare exceptions, thoroughbred and harness racing don't use letter grades. The horse handicapper has to figure out class by using the purse of the race or by purchasing a program with Class Ratings, such as Brisnet or Equibase or the track programs. Even then, class is hard to determine, especially when class ratings are from different tracks.

Although class ratings are supposed to factor in track differences, I find that this doesn't always hold up in reality. I have my own notes about this and I hope that you keep them for yourself. I also have another method that I use to determine class, other than the program's Class Ratings.

I look at something else in the program before I even start to handicap a race. I got the idea from someone who owns harness horses. He and I used to sit near each other near the finish line in the grandstand, where we shared our opinions before each race. I always started with the horse that I thought had the most class in the race, based on its Class Rating in the program.

Mark, the horse owner, didn't. He liked to bet early speed in good post positions and that's the horse he would point out and buy a win ticket on. He only bet to win and bet a lot more than I do, albeit on fewer races. Many times, he knew from inside information that a horse was ready for a good effort. Other times, he'd be able to tell by looking at a horse that it was a good bet.

One day, he asked me how I figured class, because he and I had widely differing views of who was the class horse in a particular race. I told him that I used the program's Class Rating and showed him the horse, which had a CR of 72, the highest in the race. He wasn't impressed.

"I happen to know that he got that 72 in a slow paced race and this isn't going to be a slow race," he told me. "Look at what his Earnings Per Start are and look at what he's earned so far this year, compared to the other horses in this race."

I had never paid too much attention to the Earnings Per Start info in the program. I figured it just depended on what kind of races the trainer had been able to get the horse into. And also might depend on a couple of pricey races in some cases. That's if I thought much about it all, which I didn't.

But when I looked at this horse's Earnings Per Start or EPS for this year, I saw that it was much higher than any other horse in the race. And its total earnings for the year were much higher also. When it won the race by a good margin, I decided that maybe Mark was onto something here.

Since then, I've looked at the EPS for each horse for the year and also for last year, especially when the season is just starting. I don't use it as the only reason to bet a horse, but I do consider it a significant handicapping factor. If the Class Ratings, which I still use also, don't help me handicap for class, I turn to EPS to clear up my confusion.

Like Mark told me after the horse he picked won that race that we disagreed on, money is a handicapping factor that can't be hidden from you. They have to report what a horse made for the year and that tells you the class of the races it's been running in.

Of course, one thing that you have to take into consideration is the class of the track that the horse has been running at. You can't compare a horse that has spent all its racing life at a small half-mile track in Podunk to a horse that's raced its career at The Meadows or Pocono. The big tracks have the big purses.

That said, the big tracks also usually have higher caliber horses, so that's a factor in class also. Like anything else, using EPS is only one handicapping tool, but it's one that not everyone else uses. Use it wisely and you might find that you have an advantage over those who don't.