On Saturday, October 19th, at Pocono's five eighths mile harness track, the premier contest of the harness racing season will pit the best against the best. Starting with the third race on the card, the final for 2 year old colts and gelding trotters, the fastest horses and best drivers in the harnesssphere will line up at the gate and use their best strategy to win their division of the crown.

For some fans, just watching the likes of Father Patrick, Androvette, Shebestingin and I Luv The Nightlife, to name but a few of the standouts, is enough. But for most of us, handicapping the Breeder's Crown races is a big part of the excitement of Breeder's Crown Day. I know I enjoy the races a lot more when I end up with more money than I started with in my Bet America account.

So, how to handicap this year's Breeder's Crown card? One word leads all the rest: Speed. If you've watched the elims, you know that records have been falling like the autumn leaves in the Pocono Mountains. Not only have the winners of several divisions broken records, but the horses that came in right behind them have either broken or tied records too.

In an elim for 2 year old filly pacers, both the winner, Gallie Bythe Beach and Southwind Silence were clocked at a record 150.3. Then, in the second elim in the 2 year old pacing division, all four of the top finishers actually broke that record - the one that had just been set!

With this kind of action taking place, it's obvious that speed matters more than usual in these races. So, it's the first thing I'll look at. After that, I think that post position and experience on the Pocono oval will be the most crucial handicapping factors.

Although not as dramatic as on a half mile track, post position does still have a bearing on five-eighths tracks. At Pocono, the four post is the most favorable, followed by the five post. The most difficult posts to score from are the nine, eight and seven, in that order. Horses really have to be able to either hustle out from those posts and get the lead or second place; or they have to have a race that's set up for a hard closer and be that hard closer, with a driver that can drive to that style. 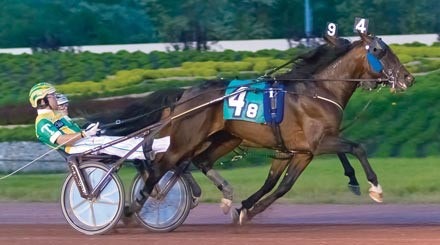 However, another thing to keep in mind with post position is the gait of the race. Inside positions are better in paces, but not necessarily in trots, especially the one post. Some trotters just don't like to be on the rail at the start and will break stride when they don't break in positions that are farther out. Some trotters actually prefer the outside posts and do better from the ones that are the worst for pacers. Look to their lines to see if that's the case when you handicap trots at any track.

Whether you're only in it for the money or for the excitement of watching records fall and very talented horses and drivers show their stuff, the Breeder's Crown races are something that no harness fan should miss. Watch and wager on Bet America on October 19th and remember to handicap for speed, post position and gait. Safe trips to all the horses and drivers on the Breeder's Crown program and good racing luck to them also.