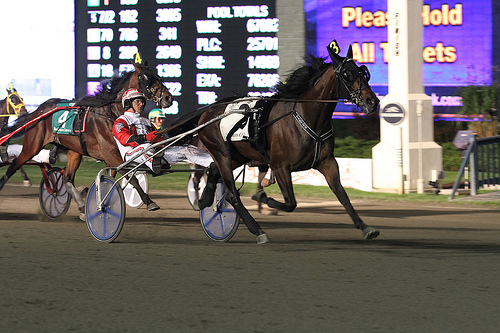 The Meadowlands has a busy weekend that starts on Thursday with the 2nd round of the Super Bowl trotter series going in 3 divisions with full fields in each division.

In the first round of the Presidential, Golden Receiver, with Tim Tetrick aboard, clocked a 1:49 win time. The winner of last year's Presidential went off at a very chalky 1-9 and was followed across the line by Fred and Ginger, second, and Modern Legend, third.

Golden Receiver looks very tough to beat and will undoubtedly go off as the favorite, but this is harness racing, so there will be a full field of determined standardbreds doing their best to bring off an upset.

Buffalo Welcomes New Drivers and Regulars as Its Meet Opens Shawn Gray and Dan Noble will have plenty of competition, as they try to keep their top places at the upstate NY track this season. Gray, who also drives in Maine, was a million dollar earner and Noble was second in earnings with over $800,000 last season. Other drivers who are regulars at Buffalo - Mark Beckwith, Jack Flanigen, Ray Fisher Jr, Jim McNeight and David McNeight III, Kevin Cummings and John Cummings Jr - will also be returning. Greg Merton, a top driver at Monticello, Ronnie Wrenn Jr from Northfield and Running Aces, Billy Dobson and Fern Paquet will be competing this season also. Tyler Smith, the 19 yr old who is closing in on his goal to be the youngest driver to reach 1,000 wins, will be driving on Saturday nights.

Billy Dobson certainly started off on the right foot opening night and the night after with four wins on each program! One of them was with Milliondollardesign with his first win this year, after winning 7 out of 18 last year. The 4 yr old gelding led all the way and finished first by an impressive 4 1/4 lengths, ahead of Shawn Gray with Wisers Deluxe and Jack Flanigen with Fantasypan.

Monticello On the day after Martin Luther King Day, January 22nd, Monticello will hold the Dr. Martin Luther King, Jr. Pace, a tribute to the late civil rights leader. For the 13th year in a row, drivers of African American heritage will compete against each other. Bobby Williams, last year's winner, will be defending his title. Cedric Washington, who won the first MLK Jr Pace, will be on hand, as will two other veteran winners: George Polk and Dennis Watson. The race is the first in Monticello's Heritage Drivers Series.

The Meadows In a thrilling finish, 5 year old pacing filly, Do Me Honor, moved from 4th to 1st to beat NY Yankee in a hard fought stretch duel. Her backers were probably just about to tear up their tickets, because she seemed to be stuck on the rail behind cover as they rounded the far turn. However, she and Aaron Merriman had other ideas, as they moved out to chase down NY Yankee and got a nose in front.

Like her namesake team, NY Yankee wasn't giving up easily and managed to get a slight lead again, before Do Me Honor came back again and got in front by a neck. It was one of the best races I've seen in a long while at the Meadows. With the added purse, the Bill Bercury trained filly's total earnings now stand at $244,588.

Harness Handicapping - Hit or Myth? The best post position at Northfield Park is the 1 post, right? According to the stats, it has a much higher percentage of wins than any other position. But regulars at Northfield know that it's a myth when the gait is a trot. Look for an outside horse that gets out fairly well and can close and you'll cash more tickets than you will if you play the 1 post in trots at Northfield. And if the track is off, don't be surprised if the exacta and even the trifecta are all outside horses!