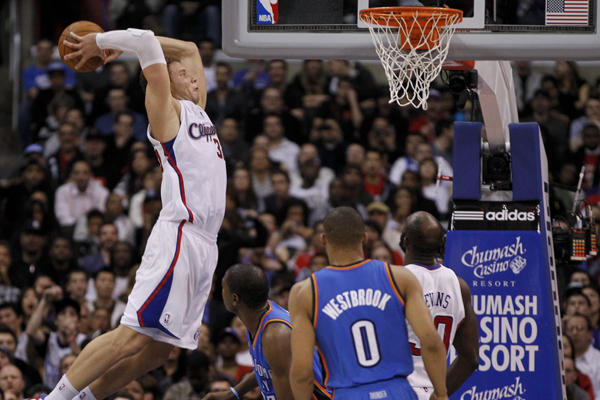 Blake Griffin has been playing lights out as of late and could be in store for a good night tonight.

A little about me: My name is Crystal, I play NBA on FanEx under 'crystaltvp' and most nights you can find me in the chat room hamming it up with the other regulars. I've been playing Daily Fantasy Sports for 2 years now across the industry and now call it my job. This blog may not fit the standards of most blogs... I am no expert and no one can predict the future on a consistent basis. I watch (at least) a portion of all NBA games and will give my insight into some of the players playing on that night. So I hope you enjoy the blog, learn something and maybe it'll help you win some games on FanEx on a big Wednesday night!

Tonight there is a $500 - Slam Dunk Wednesday contest with ONLY 60 spots and $11 entry. I was the 2nd to lock my spot last night and hope you'll join me tonight! Today is a snowy day here in NC and while my friends and family are getting called off work I'm checking the Vegas lines and injury updates.

Tidbit: The Vegas lines are NOT predictions of scores, they are not meant to be... Vegas lines are set to generate the most action on each side and guarantee the sports books win. You would much rather have a Kevin Durant in an over/under game of 215 then a LeBron (same high ceiling players) in a 180 over/under game

One of the worst feelings is to lock your lineup at 7pm and enjoy your first guy just go bananas on a team setting you up for a good night... until you realize your stud power forward (I'm looking at you Kevin Love!) has been scratched. So, let's start off with injuries to watch for tonight:

Your best bet is to check twitter for the most up to date injury news on players. Sometimes injury news doesn't break until our lineups are locked, so it's a 'risk vs. reward' situation with some Game Time Decisions and "Questionable" players.

From the front row in Charlotte, NC I watched Dirk tweak his ankle last night and go to the bench for a bit. He started the 2nd half but the game was out of hand and Nowitzki ended up with only 24 minutes and 21 FP. Ankle injuries are iffy for guys who need to cut and move, he says he will play tonight, but he's got a tough team, and at a cost of $47.26 I think he's one to steer clear of. If he plays tonight I could see him knocking out 30+ FP but that won’t be enough to cover his cost. If Dirk doesn't go tonight, the only Maverick I could see using is Monta Ellis ($39.68) or Samuel Dalembert ($23.00)... I mean someone would have to score for them... right?

Unfortunately Bogut and O'Neal are likely out as they would make semi-good value plays vs. a poor rebounding Heat.  This makes Marreese Speights a great value play at $21.46 and availability in the forward or center position. DO NOT expect him to duplicate his performance from the 76ers game where he put up 44 FP...

Wow @ the Clippers. Did you see what this team looked like the other night with Paul/Griffin/Jordan hitting on all cylinders? Yes it was against the 76ers... but, the Clippers are some kind of good. LMA went 5 for 22 (and 23 FP!) last night and was a bit banged up, the word is he will go tonight and that it's a groin injury. I'm more cautious with groin injuries on the guards and stress the ankles/feet on the big men (see Dirk's note above).  LaMarcus is priced at $56.75 costing the 3rd most in today's slate and his game starts at10:30pm (EST)... I can't take a chance on him 1) Being a late scratch 2) Getting limited minutes 3) Going 5 for 22 again.

There is plenty of injury news that will continue to break as we go into the first tip offs tonight so make sure to check around before hitting the submit button!

On who to watch for tonight:

This is not an exciting game. But as long as Conley is out again tonight (I can't imagine he plays tonight right before All Star break) I've been one to lean towards Courtney Lee ($27.56) as I see him more of a scorer and a scorer (or defensive player) is a more valuable play on FanEx then a pure passing point guard.

Foye's price has jumped up and most will stay off of him after his poor shooting performance vs. the tough Indiana D last game. Foye will be a hard roster for me but if you want to fit in another top guy he could lead some salary room

No Bogut? No O'Neal? Who's going to guard Bosh tonight? The answer is no one. Bosh will hit value tonight. He should be able to score in the fast pace game, and also gather some blocks in the process which will make him extra valuable.

Blake has been playing like a man on fire as of late and there's no reason for it to stop now. This is supposed to be the highest scoring game of the night (I doubt this is the case) Some may think Joel Freeland (TrailBlazers) injury last night doesn't have much impact here but they're wrong. Freeland was at the very least providing a break for LMA and Robin Lopez with his 10-15 minutes a night. This either adds more minutes to a hobbled LMA or Lopez ... or adding in a backup big who hasn't had much work this season. Either way this spells a good night for Blake Griffin and likely DeAndre Jordan ($43.15) I just like Griffin's upside better.

Guys I give the "Caution Flag" to tonight:

Now, I Don't think Curry will have a terrible night.... but I'd guess Wade suits up tonight after sitting last night. Curry is most experts lock for tonight but with his price tag and what I see as a tough match up I'd caution it unless you have some amazing sleepers ready to rock.

If you watch how the Pistons play, Drummond creates points (in ever sense) for him self. They have Greg Monroe and Josh Smith who eat into his minutes also. I made the mistake of running Drummond the other night and the new coach didn't play Drummond quite how Cheeks played in (Cheeks-the Pistons recently canned Head Coach-played Drummond quite well the game prior to last to the tune of 46 FP). I'm inclined to give it a game or two more until I start running with any Pistons players again until we see what this coach is going to do/rotate these guys.

Get in on the fun and build a roster to compete with mine! Let's have some fun!