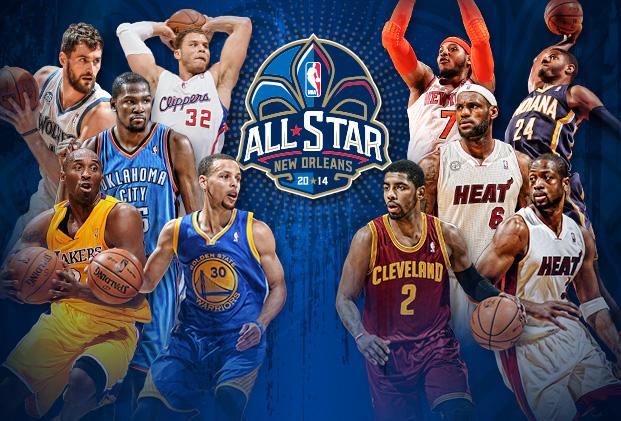 Last night on TNT the NBA announced who the fans voted as this year's NBA All-Star starters.  The winners were:

With a small NBA slate last night, we are only going to talk about the top 5 performers and not the entire slate of guaranteed contests.

The guards were slim pickings in last night's contests with only a few viable options to stick into your lineups.  There were three that came out on top with Wesley Matthews leading the pack with 30 FanEx points followed by Ty Lawson and Nick Young both with 27 FanEx points.  Wesley Matthews, when healthy this season, has been a solid contributor for the up and coming Portland Trailblazers helping them exceed everyone's preseason expectations.  Last night Wesley contributed 24 points and 4 assists in the 110 to 105 win over the Nuggets.  Ty Lawson, in a losing effort, put up 13 points, 11 assists, and 2 steals; however, Ty has been a great fantasy option this season and will continue to be as he tries to help the Nuggets get into the playoffs.  Lastly, Nick "Swaggy P" Young has been one of two bright spots for the slumping Lakers this season, and last night he put up a good effort against the defending champs with 19 points, 3 rebounds, and 3 steals.

LeBron was the second leading forward last night finishing with 43 FanEx points coming from 27 points, 13 rebounds, and 6 assists.  LeBron and the Heat have been accused of being on cruise control, but when with the best player in the league is on your team it must be easy to coast through the bottom half of the league.  The story of the night was LaMarcus Aldridge.  In my opinion, he was the biggest snub in the Western Conference All-Star starters and he proved last night why he should have been in there going off for 44 points, 13 rebounds, and 5 assists.  Obviously he will be a reserve for the All-Star game, but LaMarcus has been a complete stud this year helping the Blazers become possible title contenders.

Lastly, the center position was led by the biggest bright spot for the Lakers in recent games, Pau Gasol.  With trade rumors, coach glares, and constant chatter of how he his too old, Gasol has scored over 20 points in the last 6 games averaging 12 rebounds and 3 assists per game.  Last night he led the Lakers with 22 points, 11 rebounds, and 4 assists.  Gasol is probably missing his running mate, Kobe Bryant, but no matter where his future will take him he is still playing like an elite player.