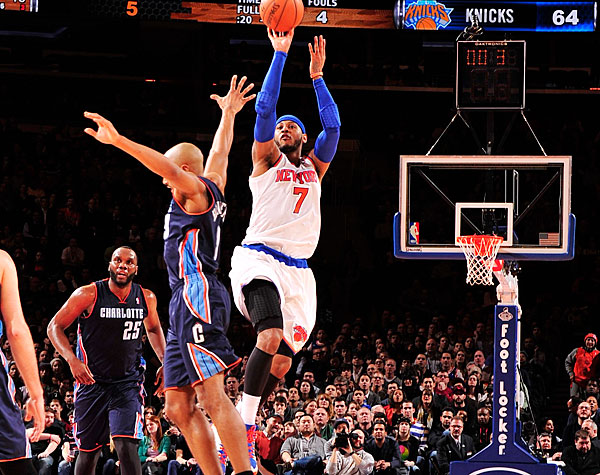 Carmelo dropped 62 points setting the MSG record including this half court buzzer beater.

Carmelo Anthony set a MSG record scoring 62 points in the blowout win versus the Bobcats on Friday.  He put on a show scoring 37 points in the first half including a buzzer beater half court shot at the end of the half. He had that look in his eye all game and was lights out from the field.  Overall in FanEx, he was the clear top player scoring a whopping 75 FanEx points helping people who chose him in any contests be contenders. Carmelo now has scored the most points in a single NBA game this season passing Durant's four other top totals.  To follow-up his 62 point performance, he dropped 35 points on the Lakers on Sunday helping the Knicks go 2-0 on the weekend.

The star player from Saturday night's games was the surprising play from Terrance Ross.  All the attention in Toronto has been placed on DeMar DeRozan and Kyle Lowry, and rightfully so as those two are putting up All-Star type numbers.  However, Ross has been a steady contributor averaging 10 points and 3 rebounds a game, but his Saturday night's performance was one he will remember forever.Dropping a career high of 51 points on the Clippers.  Although it was in a losing effort, Ross put on a show shooting 55% from the field and nailing 10 out of 17 three pointers.  The Raptors play the Nets tonight, so we will have to see how Terrance Ross backs up his career performance.

Stephen Curry had yet another great performance for the Warriors last night as he helped them defeat the Blazers.  Curry scored 38 points and had 8 assists and 7 rebounds leading to an overall FanEx score of 55 points.  On Thursday, Curry was nominated to his first All-Star game start and he definitely showed the fans why he deserved that spot.  This season he is averaging 24 points, 4 rebounds, and 9 assists, so he will look to continue his hot hand as John Wall and company come into town this Tuesday.