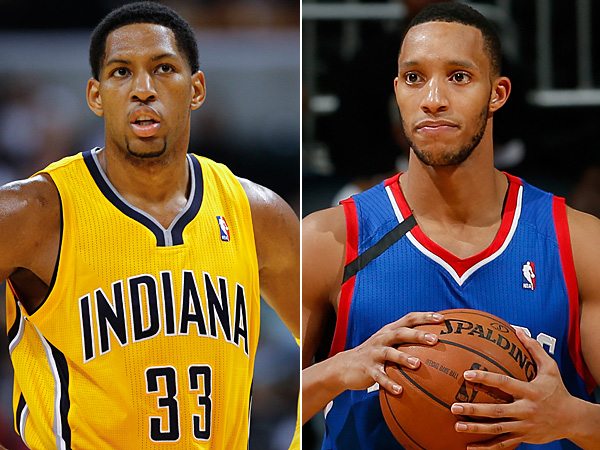 Will the last minute trade help the Pacers get over the hump and into the Finals?

Below are all of the trade deadlines that happened yesterday before 12PM PST reported from Bleacher Report.  It was a rather boring trade deadline until it ended with a bang when the Pacers dealt Danny Granger to the 76ers for Evan Turner.  While we won't know exactly how Evan Turner will mesh with this tight group of players, but player for player it is probably an upgrade for the Pacers and Granger boards a sinking ship in the 76ers.  Will this be the move that pushes the Pacers past the Heat come June??? Only time will tell and we still have a lot of games to play till June.

– The Golden State Warriors received guard Steve Blake from the Los Angeles Lakers for guards Kent Bazemore and MarShon Brooks, per The Associated Press (via NBA.com).

– The Brooklyn Nets acquired guard Marcus Thornton from the Sacramento Kings for guard Jason Terry and forward Reggie Evans, per The Associated Press (via NBA.com).

– The Houston Rockets picked up forward Jordan Hamilton from the Denver Nuggets for point guard Aaron Brooks, per Adrian Wojnarowski of Yahoo Sports

– The Atlanta Hawks received forward Antawn Jamison and cash from the Los Angeles Clippers for the draft rights to Cenk Akoyl (the 59th pick in 2005), per Brad Turner of the Los Angeles Times.

** Other news: Glen Davis, of the Orlando Magic, was not moved before the deadline, but the Magic have settled on a buy-out deal ultimately releasing Daivs to waivers come Monday.  Therefore, watch to see who picks him up and what players get a boost in minutes.  The player to watch is Tobias Harris...

Thursday's Battle between the Heat and the Thunder:

I didn't even have a chance to turn on the TV for the start of the game before Twitter informed me that LeBron was already 5-5 from the field with 10 points. If I were to bet on what LeBron was thinking before the game, it was probably something along the lines of "I am the best in the game, we will this game, and shut everyone up about Durant being the MVP."  Well this morning it seems as though LeBron accomplished all of those last night in the victory over the Thunder.  LeBron's dominant performance for most of the game overshadowed Durant's late push in the fourth quarter, and when LeBron went down with a bloody noise everyone thought Durant would just take over and lead a comeback.  Well that didn't happen and even Durant admitted that he was "careless with the ball at times."  The bright-side for the Thunder was that their All-Star point guard, Russell Westbrook, was back on the court for the first time in 30 games.  While he looked rusty, it was great to see one of the best back at it with his wing-man Durant making the second half push for the playoffs.  The match-up between LeBron and Durant this season is tied at one a piece, but I have a feeling that this won't be the last meeting between them this season...