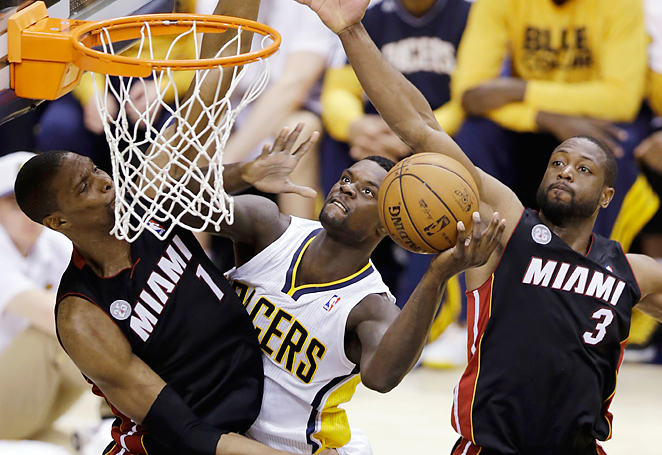 Pacers have found themselves looking up at the Heat for the top spot in the East with less than 3 weeks left.

This past week in the NBA has been a bit overshadowed by the craziness of March Madness, but there was still some great action and developing sorties as we get closer to the playoffs. Philadelphia tied the longest losing streak in NBA history and pulled out the victory against the Pistons over the weekend to end the streak at 26 games.  Imagine after that terrible stretch of games they are still not last in the NBA with Milwaukee still two games behind them at 14-60 on the season.  On the other side of the standings, the red hot Spurs set a franchise record last night winning their 18th straight game.  They may be called 'old' or 'slow' but these Spurs are here to stay and are the leading title candidate to take represent the West in June.  Now on the other side of the country, the Pacers have lost three in a row, including a beat down by the Spurs last night, and have relinquished the top seed in the East to the Heat.  Winners of 3 straight, the Heat sit atop the East with 9 games remaining on their schedule and a trip back to the finals seeming all but locked up.

Here are the 10 players with the highest FanEx Average over the last 7 days: It shouldn't even be a question any more on whethe Fr Kevin Durant is the leading candidate in the MVP race.  With a better record than LeBron and the Heat and overall better statistics, Durant looks primed to take home his first Maurice Podoloff trophy of his career. Curry follows Durant in the FanEx averages with two great games last week against the Knicks and Grizzles where he scored 32 and 33 points respectively. The Warriors are clinching onto the 6th spot in the West with only a two game lead ahead of 7th-9th place.  As this playoff picture heats up in the West, look for value in teams that need a win to stay alive.

The biggest surprise of this top ten would have to be Nikola Vucevic.  Vucevic's last three games have been as follows: 22-10-4 (points-rebounds-assists), 24-23-1, and 22-10-1.  He is averaging a double-double on the season, and is heating up for the Magic at the right time for fantasy owners.  With teams locked into the playoffs and resting their stars, look for players like Vucevic to be a great option to get you at minimum 10-points and 10-rebounds. Kemba Walker is the other new face to this list this season as he has put together 5 consecutive games of 20 or more points.  In the Bobcats game last night, Walker delivered a 21-point, 5-rebound, and 10-assist game leading to 39 FanEx points.

Here are the 10 players with the highest FanEx point total over the last 7 days: Carmelo Anthony leads this list with 5 games over the past 7 days.  He injured his hand on Sunday, but it didn't seem to bother him on Monday as he dropped 34 points and grabbed 8 rebounds in the Knicks win over the Jazz.  The surprise on the list is Derrick Favors, who also played 5 games during the 7 day span.  He has been a good fill-in at the forward position for most of the year, when he is healthy, and has averaged 12.2 points, 10 rebounds, 2.4 assists, and 2.4 blocks over his last five games.  Favors could be another great option as the regular season comes to an end and teams rest their stars.

With two and a half weeks remaining in the NBA season, the playoff picture is heating up with the East top seed still in question and the seeding in the West far from locked. There is going to be a loser out of Dallas, Memphis, and Phoenix with all three deadlocked with less than 3 weeks to go.  The sad part is that one of these teams will not make the playoffs when all three would be tied for 3rd in the East at the moment. Should be a fun next few weeks in the NBA and in NBA Fantasy!