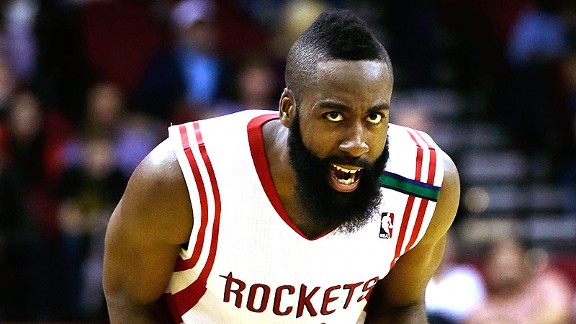 Fear the Beard.... Harden has picked up his game without Howard and was last week's MVP on FanEx.

With UCONN getting crowned as the NCAA Men's Basketball Champions, I am sure you forgot what is going on in the NBA over the past week.  So here is a little FanEx recap for you and give you an insight into what the playoff race looks like heading into the last full week of NBA regular season games.

Here are the 10 players with the highest FanEx Average over the last 7 days: Kevin Love tops the FanEx scoring this week averaging 45.5 FanEx points in just two NBA games.  Love was a late scratch on Saturday against the Magic with back spasms, but the Wolves to a double overtime victory over the Heat with his 28-points and 11-rebounds.  Additionally, Love put up a triple-double against Memphis on Wednesday finishing with 24-points, 16-rebounds, and 10-assists. Love is slotted to return tonight against the Spurs in what could be a blowout with the Wolves missing 4 players due to injury.  Kyrie Irving made a splash in his week back from injury dropping 44 points on the Bobcats on Saturday.  Irving has been in the media mostly about his clash between teammate Dion Waiters, but they did make a public statement together saying that they "love playing together."  It remains to be seen if the Cavs keep both of these guards moving forward.

Kevin Durant officially passed Michael Jordan's record of 40 consecutive games of scoring 25 or more points when he scored 38 points on Sunday against the Suns. KD is 5 games short of Oscar Robinson's 46 game mark and a long way from breaking Wilt's record of 80 straight games; however, Durant has locked up the race for MVP in my mind.

Here are the 10 players with the highest FanEx point total over the last 7 days: James Harden leads the FanEx totals over the past week with 4 solid performances in the absence of Dwight Howard.  Harden willed the Rockets to victories over the Nuggets and Thunder scoring 32 and 39 points respectively in each. Contributing in other ways than scoring, Harden is this past week's MVP flirting with triple-doubles on 2 occasions last week.  The Rockets are sitting in a comfortable position in the Western Conference, and they are going to be a fun team to watch.

The surprise of the top 10 would be the outstanding play of Omer Asik.  The Rockets did the right thing in keeping their security blanket for Dwight Howard as Asik has stepped into the starting lineup without skipping a beat.  Over the course of the week, Asik had two 20+ rebound games and in all four games he finished with over 20 FanEx points for the first time all season.  With Howard still day to day, Asik should continue to get production and value at the center position.