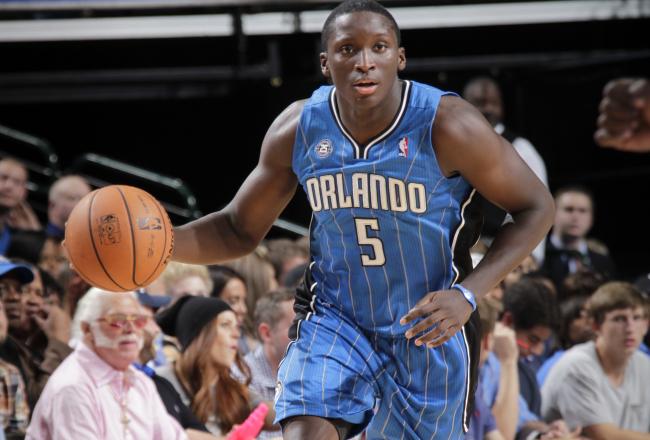 Oladipo will get the nod to start tonight in place of the injured Jameer Nelson.

Last night the Spurs won their 14th straight game handing the 76ers their 25th straight lose.  The 76ers could break some records this year, but they are ones that no one wants their name on.  Tomorrow the 76ers enter Houston to play the red-hot Rockets where a lose ties the Cavaliers record of 26 straight loses in the 2010-2011 season.  Durant continue his 25+ points streak last night scoring 27 points on 10 for 21 from the field in a 117-96 victory over the Nuggets.  LeBron lifted the Heat passed the Blazers with a game winning layup and a Chris Bosh block as time expires, and the Heat now draw within two games of the Pacers.

Tuesday's are a small slate in the NBA, but at least there is NBA on TNT tonight! The players that will not play tonight due to injury are: Jameer Nelson, Kyrie Irving, CJ Miles (a game time decision), LaMarcus Aldridge, and Pau Gasol (Currently doubtful).  With all of these typical starters out tonight it is a day of plugin backups that you know will get minutes and reach value.

Oladipo is the hot player tonight with the news that Jameer Nelson ill sit out tonight's game against the Blazers.  Oladipo has been on a nice run scoring double digit points in his last 7 games coming off the bench and in his last game against the Lakers he produced 21-points, 5-rebounds, and 10-assists. Although the Blazers have a solid point guard in Damian Lillard, they have been slumping as of late especially on the defensive end with the absence of their all-star LaMarcus Aldridge.

With no Pau Gasol and Tyson Chandler still questionable as to if he will play, Amar'e gets a hug bump tonight.  The Lakers are notorious for giving up tons of fantasy points to opposing players, and Amar'e is on a solid 4 game streak scoring over double digits in all four.  Look for Amar'e to get around 20 and 10 if Chandler plays with limited minutes.  IF Chandler goes tonight, then I like Chandler over Amar'e, but with the game being the last game of the night I wouldn't risk the last minute Chandler sit in a guaranteed roster.

I am going to rid the Jarrett Jack train as long as Kyrie is sidelined with his injury.  Jack is coming off his best game of the season against the Knicks on Sunday finishing with 31 points, 10 assists, and 5 rebounds.  The Raptors play better defense than the Knicks, but Lowry is seeing limited minutes to rest for the playoffs and Jack is nice complement to Dion Waiters (also a good play tonight).  Look for Jack to return to earth slightly, but on he should be able to put together a decent night of value on a small slate day.

All aboard the revolving lineups of the Lakers and Mike D'Antoni's offense.  Jordan Hill put up good numbers in back to back games after not producing any fantasy value for over a month.  Hill will likely get the start tonight against the Knicks, since D'Antoni tends to ride the hot hand, so look for Hill to be a rebounding machine tonight without Pau Gasol next to him.  As the cheapest Center option for tonight, Hill is great play to be able to use your additional salary cap on Durant and other star players.

There are talks from the Raptors that they are going to limit Lowry's minutes moving forward in preparation for the playoffs, so Vasquez should get a little bump with an increase in his minutes.  Tonight the Raptors play in Cleveland on a back to back, so anticipate Vasquez to be on the floor more going against a short handed Cavs team.  I like Vasquez to reach value tonight and possibly surpass depending on the Lowry situation unfolds.