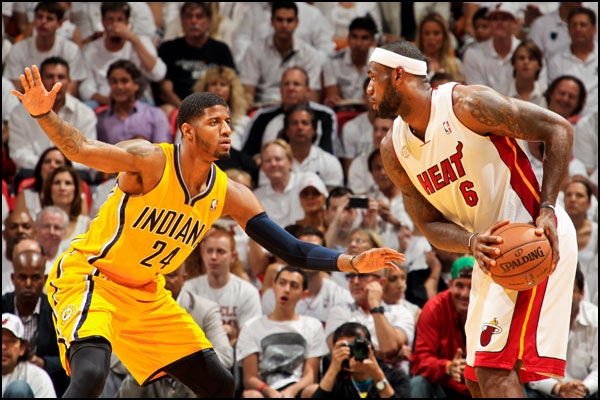 Tonight we have a full slate of NBA games with the marquee match-up in the East with the Heat taking on the Pacers in Indianapolis.  This is the first meaningful game between the top two Eastern rivals with less than a month to go until the end of the regular season.  Ray Allen is doubtful and Dwayne Wade is a game time decision, but I anticipate that Wade will play tonight.  Seeding is so important come playoff time and the Pacers desperately want to reverse the tables from last year where they lost game 7 in Miami.

Monitoring player rotations and fluctuation in minutes is very difficult, but it can be the difference between you looking down on the leader board or starring up at rosters that dominated yours.  Injuries are the often cause for increase in back-up minutes, but a player can just catch fire and find himself in the game more.  Make sure to follow FanEx Sports on Twitter for up to date NBA injury news as well as any FanEx Sports news and updates!

The Five Guys to consider for tonight's NBA games:

All aboard the Dieng bus as Pekovic is doubtful for tonight's game again.  Over Dieng's last 5 starts, he has averaged 12 points and 13.8 rebounds.  Tonight the Timberwolves face the Hawks and I like Dieng's size and activity to cause problems for the Hawks tonight.  As a cheap option at Center, Dieng is the perfect fill-in with the upside potential of delivering another 20-20 game against a sub-par defensive team.

Although he doesn't have the ideal match-up tonight playing against the Clippers, he will be getting tons of minutes should Eric Gordon and Brian Roberts don't play tonight.  Evans has returned to his rookie year form as of late and he is coming off a solid game against the Nets delivering a 33-point, 10-rebound, and 7-assist game for the Pelicans. Both Evans and Davis will see a lot of attention tonight from the Clippers, but they both have improve their games to handle the heavy workload that is demanded of them.  Look for Evans to be a solid start tonight.

Waiters is taking advantage of every extra opportunity he is getting with Kyrie Irving sidelined still.  He has scored over 20 points in his last 4 outings and is filling up the stat sheet every night.  Tonight the Cavs take on Pistons who are among the bottom half of the league defensively.  I like Waiters again tonight even on a back to back mainly due to the sheer amount of volume he is getting on the offensive end of the floor.

David West seems to have the Miami Heat's number as he averages 20 points,  6 rebounds, and 3 assists against the Heat which is 4 points higher than his career average.  Tonight is a huge marquee match-up in Indy, so look for both teams to be fired up as the fight for the top seed heats up.  I expect West to have another great against the Heat, especially if Chris Bosh guards him on the wing.  This game is what everyone in the league has been wanting to see, and how could you not have anyone from at least one of these teams to make the game that much more exciting.

The Knicks got absolutely dominated by the Lakers bench last night playing no defense what so ever.  Now while the Knicks struggle to make it into the playoff picture, Carmelo Anthony is still playing at an extremely high level.  Carmelo has scored more than 20 points in every game since January 11th and he is averaging 36 points, 11 rebounds, and 3 assists against the Kings this year.  Look for Anthony and the Knicks to have a better output tonight in Sacramento with Anthony leading the way as usual.