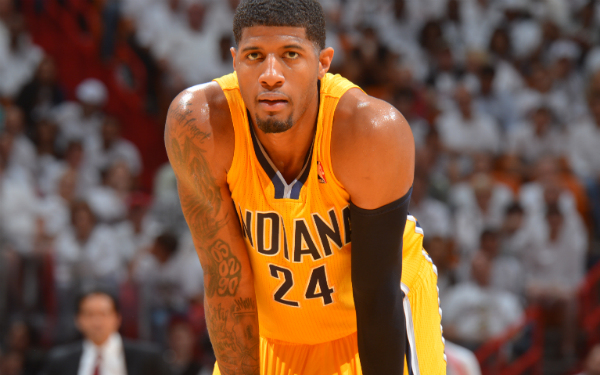 Paul George scored only 2 points as the Pacers got routed by the Bobcats. Are the Pacers declining?

Yesterday was a bit rough regarding some big name players not living up to their potential and fantasy players expectations.  Kevin Love seemed human only scoring 19 points and 8 rebounds, Paul George was held to 2 points against the Bobcats last night who recently gave up 61 and 62 points to LeBron and Carmelo, and the entire Atlanta Hawks team who only put up 78 points in the game only had one starter to finish with double digits (Teague with only 10 points).

Everyone's total roster scores were drastically effected by top players not performing to their value, but not all players were duds last night.  Carmelo Anthony dropped 33 points and helped his struggling Knicks defeat the Timberwolves in Minnesota. Al Jefferson has been a legit big man this whole season and not even the best defensive team in the league could hold him down as he scored 34 points in the Bobcats rout of the Pacers last night.

Today we only have three NBA games but they are star studded with the Heat taking on the Spurs in a Finals rematch, the Thunder and Durant take on Dragic and the Suns, and lastly the Clippers take on the dismal Lakers team that seems to be gaining some bit of confidence.

With only three games on the slate for tonight, I will only be giving out 3 studs that I think will help you fill out your perfect rosters.  So here we go!

Thank you to all of the participants last night and keep entering those lineups as we have more promotions coming your way this Friday.

Friday: We have the Fun Friday prize giveaway.  This week we are giving away a $50 Dick's Sporting Gift Card to the winner of the FanEx Dollar Dribble!