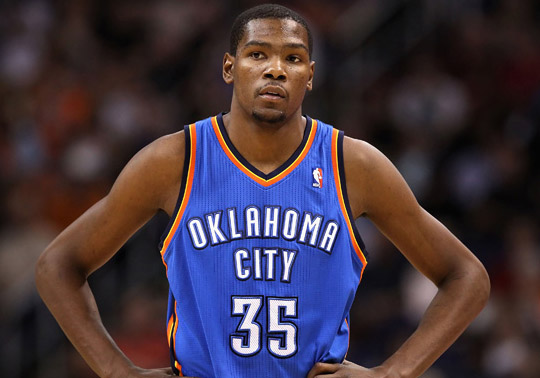 Kevin Durant put together another MVP type week with his 51 point performance against the Raptors.


Here are the 10 players with the highest FanEx Average over the last 7 days: Kevin Durant was the star of this past week with his ridiculous game against the Raptors.  In that game Durant scored 51 points, grabbed 12 rebounds, and dished out 7 assists which totaled to a whopping 69 FanEx points on the night.  He continues to play at a MVP level separating himself from LeBron and the rest of the considered players this season as he tries to catch MJ's record of 40 consecutive games with 25+ points.  This week Durant has 4 favorable match-ups against the Nuggets, Mavericks, Kings, and Jazz, so look for Durant to be your top star again next week as he carries his Thunder team to the top of the Western Conference.

Anthony Davis cooled off this week only due to his sudden scratch against Toronto on Wednesday. In his two games against the Hawks and Heat he still averaged 32 points, 11 rebounds, and a block keeping him a top option at both the Center and Forward positions.  Chris Paul had two great games last week averaging 29 points, 3 rebounds, 11 assists, and 4 steals leading to a top 3 average.  While he only had 2 games hurting him in the total points over the 7 days, he makes up for it this week playing 5 games in 7 days starting with a dismal Bucks team.  Look for Clipper players, including Paul and Griffin, to be heavily owned this week as every game counts for seeding in the West as we enter the home stretch.

Here are the 10 players with the highest FanEx point total over the last 7 days: The total rankings are different mainly due to the number of games each of these players played (all but 4 played 4 games last week).  However, this gives you an indication as to who is scoring the most FanEx points over the entire week.  As expected, Durant leads the pack with 174 FanEx points in just 3 games making him the most valued player last week.  Kyle Lowry and DeMar DeRozan both crack the top 5 together as they both put together 4 consistent games for fantasy owners last week, and this week could be even better as they play 5 games over 7 days with 4 of them coming against under .500 opponents.  Although the 76ers are closing in on the worst losing streak in NBA history, Thaddeus Young is still producing decent fantasy numbers night in and night out.  While his shooting average is borderline horrendous over the last 6 games, he has still managed to score over 20 points in all 6 games.  This week could be the week the Cavs losing streak falls as the 76ers continue on the road against San Antonio and Houston before returning home to play the Pistons in what could be the 27th straight lose.

Kevin Durant - After another phenomenal week, how could you not start Durant every time he plays.  The Thunder did receive good news when they found out that Westbrook only minorly injured his surgically repaired knee.  With that said, the Thunder could be without Westbrook tonight putting more weight on Durant's shoulders. No worries here as Durant has proven he can carry this Thunder team without Westbrook, and against a favorable match-up against the Nuggets Durant should have another field day.

Al Jefferson - Now Al has returned back to earth after an unreal stretch of sheer domination.  With that said, he still dropped 28 points, 7 rebounds, and 6 assists against the Blazers last night and could face a Howard-less Rockets tonight.  While the initial reports are that Howard may give it a go tonight, I still like Jefferson's skill set even with Howard in the lineup.  The Rockets have been on an impressive stretch of 3 straight wins without Howard, but tonight I like Jefferson to deliver in a big way whether it is against Howard or Asik.

Eric Bledsoe - Bledsoe has finally gotten to level where he looks comfortable out on the court.  The last two games he has played over 30 minutes and averaged 22 points, 5 rebounds, and 5 assists.  With a favorable match-up against the Hawks, I like Bledsoe at only $30.26 to be a safer play than some of the other higher priced guards tonight.  For those of you that have been patiently waiting to play Bledsoe, this could be the week where he really pays off his fans.

Henry Sims - When you are on a team that is on the verge of setting the all-time losing streak you tend to get lost in the shuffle; however, Henry Sims has delivered two games in a row for the 76ers.  Over the last two he has averaged 17 points and 14 rebounds against two teams with good big men in Chicago and New York.  Although tonight the 76ers play a tough Spurs team, at $23.85 Sims could be a decent value play at the Center position tonight.  Who knows, maybe the 76ers have gotten inspired by watching Dayton and Stanford pull off the upsets this past weekend...

Rodney Stuckey - I may be out in left field on this one after his terrible performance against the Clippers, but prior to that game Rodney was getting 30+ minutes and scoring double digits.  If Stuckey gets the start tonight against the Jazz or finds his rhythm early in the game, he could be a great value play at only $28.46 tonight.  The Jazz are the easiest team the Pistons have played in the last 4 games, so Jennings and Stuckey could both have some good value tonight.