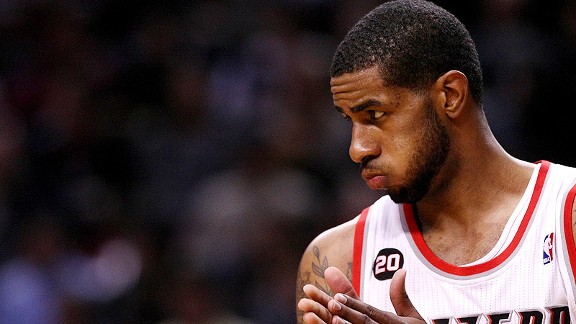 Aldridge has been the star of the playoffs thus far leading Blazers to a 2-0 series lead over the Rockets.

The NBA Playoffs are nothing short of excitement after the first 5 nights of first round games.  5 out of 8 road teams won game 1, and after all game 2's have been played, the road teams have won 9 out of the 16 games played.  If those stats don't show you the parity among the teams that are in this years playoffs then I don't know what does.  These games have been exciting, close, and everything the fans of the NBA could have hopped for.

So far the star of the playoffs has to be LaMarcus Aldridge after his two beast mode performances in Houston.  In the first two games he is averaging a dismal 44 points and 13 rebounds and has helped the Blazers open up a 2-0 series lead heading back to Portland.

The Miami Heat are the only home team to go 2 and 0 in the first two games thanks in part to Al Jefferson playing through immense pain.  I bow down to Jefferson for the effort and determination to play in these playoff games, and I hope that the Bobcats can win at least one game at home because they at least deserve that for their efforts in games 1 and 2.  The Spurs, my pick to win it all, looked absolutely terrible last night turning the ball over 22 times.  Dallas beat them with a balanced attack as the high scorer was Ellis with 21, but think that this lose won't wake up Duncan and the veteran crew in San Antonio.  Look for them to come back in game 3 with lock down defense and ball security being their top priorities.

The state of Indiana essential disbanded their own team after a game 1 lose to the 8th seeded Atlanta Hawks.  For game 2 last night, tickets were going for $8 and if the game ended after the first half, Roy Hibbert would have been sold on Amazon... However, that is why we play the full 48 minutes and Paul George came to rescue for his team, coach, and state with a big third quarter leading to a 19-0 run mid-way through the fourth that sealed the victory.   Heading to Atlanta for game 3, the Pacers have a little more confidence in their ability to play basketball again, but they have struggled in Atlanta in recent games.  Tonight the Pacers have a chance to silence all of the noise about how bad they have been over the past three months, but it ain't going to be easy.  Tonight I think the Pacers win a close one and ultimately take the series in 6 games with a major wake up call heading into round 2.

Game one was one of the worst games to watch in the opening round with so many foul calls and key stars fouling out in only 20 minutes.  Now the Clippers looked dominate in game 2 with an impressive 40 point victory, but don't count the Warriors out of this one just yet.  They head home tonight to Oracle to play in front of their home crowd and anything can happen when you have the splash brothers as your backcourt.  Tonight I think the Warriors win game 3 in a close up and down battle, but I think the Clippers pull the series out in the 7th game.  This series is going to come down to the coaches and Doc Rivers is far away a better coach than Mark Jackson, so I think the experience and determination of this Clippers squad will get them into the second round.

The Thunder should be a little worried at the position they have put themselves in after a heartbreaking overtime lose in game 2.  While I do think the Thunder pull out the series, I think the Grizzles have a great shot at upsetting them for the second straight year. The Grizzles play with grit and want a pound'em out type of game, so if they can control the pace in game 3 we could see the Grizzles go up 2-1.  However, the Thunder will win the series behind the soon to be MVP, Kevin Durant, because he won't let his Thunder settle for anything less than a shot at the title come June.

Player of the Night:

Conley isn't the "sexy" pick for tonight, but his first two games against the Thunder have been nothing short of fantastic.  In the series, Conley is averaging 17 points, 11 assists, and 6 rebounds and was a huge part in why the Grizzles won game 2.  The Thunder haven't found an answer to stop Conley, and with Calathes out for the 20 games Conley will continue to see 40 plus minutes. Expect the Grizzles to come out firing on all cylinders tonight with the stadium rocking, therefore, I like Conley tonight in a pivotal game 3 for both teams.