Season Win Totals - The Battle for the NBA Atlantic Division

The NBA Atlantic Division is am embarrassment of top-heavy riches. The Sixers, Celtics and Raptors are the three best teams in the Eastern Conference and all of them have extremely high season win totals. Which team should you ride with, and which should you avoid? This is one division race you don't want to miss.

Boston Celtics - 58.5 Regular Season Win Total There's no doubt in the eyes of basketball fans around the world when it comes to the Celtics. They made it within one game of the NBA Finals last season, losing in seven to the Cleveland Cavaliers. Not only do they not have to contend with LeBron James, the Celtics also get their two best players back. Gordon Hayward looks healthy, and Kyrie Irving has reportedly committed to the team long-term (at least verbally). Boston went 55-27 SU and have all the makings of a championship team. The Warriors-Celtics would be the best NBA Finals matchup if everyone was healthy. The only reason you'd shy away from the NBA Atlantic Division favorite is fear of injury. This is probably a preferred UNDER play just to stay safe, but if Boston continues to trend in the direction that they're going, a 60+ win season is definitively within reach.

Toronto Raptors - 54.5 Regular Season Win Total Oh boy. Where do you even start? Kawhi Leonard arriving is an upgrade over DeRozan no matter what anyone says. The fans and this franchise know what the ceiling is with DeMar, and the San Antonio Spurs might just find out the hard way. The difference between the two is apples and oranges. DeRozan is a potential NBA All-Second Team guard, and Kawhi is an actual MVP candidate. Beyond that, Leonard is a much bigger, better and visceral defender. There's no outright comparison. When you can get the best player in the trade, you pull the trigger and that's what the Raptors did. 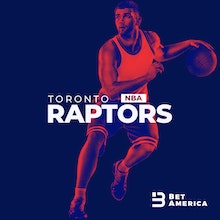 This is a team that was already the 4th best offensive team, the 7th best defensive scoring team and the best Eastern Conference team in the regular season. A lot of people will point to the absence of Dwane Casey, but Nick Nurse is an understudy of the 2017-18 Coach of the Year. There's no telling what Nurse is capable of as a head coach, but there are many pundits that weren't high on Casey's roster management, nor his late-game fumblings.

While gunning for the OVER might seem like the logical play here (and it is), there is just a ton of potential dramas that could unfold here. What if Kawhi gets hurt again, and sits? What if his weird agent/dad support group just tells him to stop playing ahead of the playoffs so that he can preserve his health? It felt like Leonard was good to go for the playoffs last season while still in San Antonio, and yet he pulled himself out of the action. There's no loyalty between him and the Raptors. All the weird things are in play, including Kyle Lowry pouting his way through the season.

Toronto is good enough to get to 55 wins and be a contender for the top seed, but it all depends on Kawhi's production, consistency and willingness to play out the whole season. The first two are spoken for elements. That last one? Not so sure. If anything, the season win total on the Raptors is a stay-away play. The more fun play? The Raptors to win the NBA Atlantic Division at +250.

Philadelphia 76ers - 53.5 Regular Season Win Total This is probably the most fun total to bet within the NBA Atlantic Division. Inevitably, when you invest in a long term future like this that hangs on every win and loss, you're going to follow the team closely. What's more fun than tracking the antics of Joel Embiid? Ben Simmons is a highlight machine that is only going to get better. They're well coached, likable and coming off a strong year where they posted a 52-win season. Getting a couple more is going to be tougher to some degree, but the East is more top heavy than it's ever been. And if Markelle Fultz is actually useful, this is a 55+ win team. Hammer the OVER, sit back, and enjoy the show.

Brooklyn Nets - 31.5 Regular Season Win Total One of the outright strategies for betting regular season win totals is finding bad teams with really low numbers that could catch them easily if things go right. What do the Nets need to do to crest 31 wins? They need the Heat, Cavaliers, Pistons, Magic, Nets, Hornets, Hawks and Bulls to be below league average. None of that is impossible. The Nets are a sneaky good team despite horrifying payroll management. Allen Crabbe, Kenneth Faried, D'Angelo Russell, Ed Davis and Sepncer Dinwiddie are all terrific hustle players. Toss in Chris LeVert along with Rondae Hollis-Jefferson and you have a team that has sneaky depth. Why does that matter? Well Brooklyn stumbled to 28 wins last season and they were very bad. Now they're a little bit better, and they have the makings of a roster that has a bit too much pride to just lay down every other evening. Brooklyn is a logical UNDER play considering their sordid history, but the brave and bold will take a flier on the OVER. They're not the bottom feeder in the NBA Atlantic Division. That honor goes to the...

New York Knicks - 29.5 Regular Season Win Total What exactly are you betting on if you think the Knicks are going to win more than 30 games? Well, you're hoping that rookie Kevin Knox is better than he was at Kentucky. You're praying that Kristaps Porzingis comes back from the torn ACL that's been reportedly difficult for him to recover from (he might miss the whole year). You're keeping your fingers crossed that former top-10 draft picks Noah Vonleh and Mario Hezonja are at least serviceable. Basically you're hoping that the Knicks don't become the Knicks again. It's a lot to ask, especially when the Knicks are visibly trying to shed cap space for next summer (already!). Love the David Fizdale hire, but pessimistic that the Knicks will be anything worth while considering the roster that they've build. They were barely credible when Porzingis was healthy.