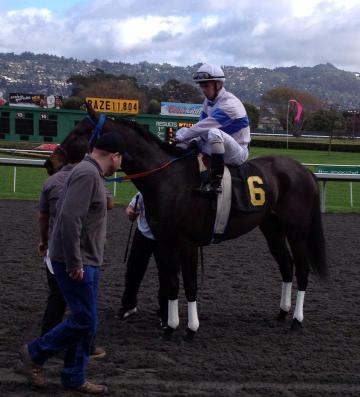 There is a pick-6 carryover on Thursday at Santa Anita, but the more interesting carryover takes place up north at Golden Gate Fields.  No one hit the pick-5 on Sunday so there will be a carryover of almost $150,000 when race resumes tomorrow.  The sequence starts in race three, a low-level claiming race for fillies and mares.

Most playing the pick-5 will start with A.P. Anna and Myeyesonyou, the two morning line favorites.  They look best in the race, but don’t sleep on Terrella, who finally moves to a decent post after drawing either one or three in her last five races.  Tribal Rain drops several levels and is 8-1 on the morning line.

One the turf for race four with Life Is a Stone looking for the hat trick after winning her last two races by a combined three and three-quarter lengths.  She makes her turf debut, but is bred to handle the surface switch and she is trained by the always dangerous Jerry Hollendorfer.  Hollendorfer also has Emmy’s Hall, who could set the pace and has a turf win on her resume.  In fact, Emmy’s Hall and Lucky Moment are the only two that own wins on the grass.  Think Sunshine broke the maiden in her debut in style and is bred to handle both the step up in distance and change in surface.

Taking a shot in race five with Aiming Fluid, but contention runs deep.  She should be pressing a hot pace that includes Lincoln Launch and Swiss Game.  Only five furlongs to run, but Easy Six, All About Adam and Our Mandate may get a favorable pace scenario.

Dave’s Cutie handled maidens with ease in her debut, but must run better than the class-dropping Hollanita if she is to win race six.  Hollanita started her career three-for-three then was out classed in a pair of allowance races.  Back against easier company, Hollanita can score for favorite backers.  Giannonatti goes for Hollendorfer/Baze and just finished second at this level three weeks ago.

If people don’t single Hollanita then they may opt to take a stand in the last with the 7-5 favorite Dark Night’s Light.  The Private Gold filly was overlooked in the wagering in her debut, but ran lights out, finishing second, nine lengths clear of the third place filly.  Some Kind of Pete is 9-5 and makes her debut for a trainer who is 30% at the meet and 1-4 with debut, maiden claimers.  Truth be told, after those two, the pickings are slim.

Good thing is, with the carryover and low takeout, this pick-5 should pay pretty well.

First post on Thursday at Golden Gate is 3:45 pm ET with pace three scheduled to break from the gate at 4:47.