A pick-6 carryover of just over $80,000 awaits bettors on the Thursday card at the Barretts Race Meet at Fairplex; let's take a look. The sequence begins with race three, a four-furlong sprint for maiden claimers.

Teasdale Thunder is the morning line favorite making his debut for trainer Brian Koriner. The son of Thunderello has a bullet four furlong drill coming into the race and will take some catching from the rail. Choo Choo Charlie makes his first start in Southern California after beginning his career in maiden special weight races at Canterbury. 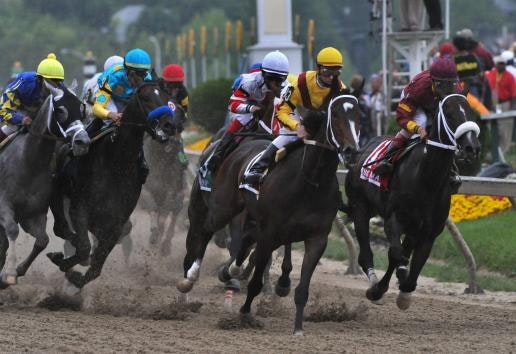 Hodge is a solid favorite in race four, a claiming race at four furlongs for three-year-olds and upward that have never won two races. Trained by Michael Machowsky, Hodge comes off a layoff of seven months, but has the speed to be on the lead. Truth is there is nothing else in the race if Hodge runs his race.

The start of the late pick-4 is a six furlong sprint for maiden claimers and this may be the first race that will produce a price. Dewrag, Our Smokin Hero, Slight Edge and Marv are the ones to use with Foxy Humor worth a long look at 12-1 on the morning line.

Our Magic Couple has won four of six races on fast dirt and returns to his preferred surface after a seventh place finish in a turf stakes race at Santa Rosa. The distance may be bit of a concern; however, as most of his wins have come in shorter races. Myfundsarelo won his debut in July at Hollywood Park and has been working well in the mornings for his second career start. Shining Son has one win on his resume and that came on conventional dirt. He will be running late. Rocky Barboa is 5-1 on the line and may be worth including off his bullet three-furlong workout earlier this week.

Big Wags is all race horse with 45 career starts including eight wins, 11 seconds and four thirds. He has run well over the track before, four seconds in five starts, and should love this 11-furlong, four-turn race. Tamarack Smarty comes off a win 11 days ago over the track and is another who will like the distance. Keep Movin' stretches out after a mile race on the turf and may be the one to catch under the five-pound apprentice.

The finale is a state-bred maiden claimer for two-year-olds and it's now or never for the maiden special weight dropper Tribal Music. If he doesn't get the job done, look to Sailors Brother, He's a Wizard, Astutely and Anythingtogeteven to upset.

The pick-4 looks like a very good bet and one that is tough with multiple contenders in each race. Since the pick-6 starts with some well meant favorites, both bets can be played. For budget minded tickets use less on the pick-6 then hedge on the pick-4.