Well that didn't take long as the first day of racing at the final Hollywood Park meet proved too tough for bettors, creating a carryover of over $41,000 into the Friday card. The sequence starts with race three; let's take a look. 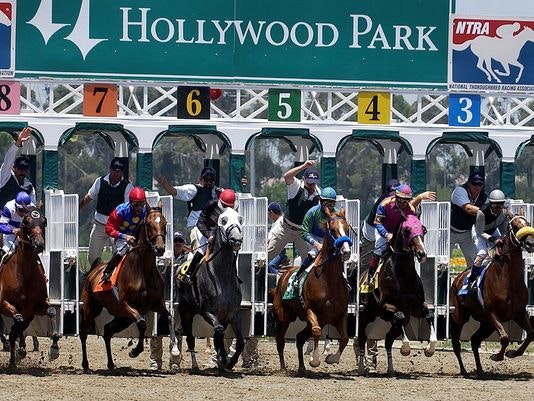 Joyce and Me is the morning line favorite for race three, making his first start since late September going first-off-the-claim for trainer Jerry Hollendorfer. Joyce and Me has one win and one second in two starts over the track and Hollendorfer sticks with Martin Pedroza, who was aboard for that win. Toomanytomatoes drops in class and has a win over the track, but is cutting back in distance. Granny Calling looks like the speed, breaking from post one.

Maiden claimers roll six in race four and on the drop from maiden special weight races, Charisma Code is the one to beat. He is; however, up against it pace wise as is 7-2 second choice, Sooo Major. The speed may come from Oneandonlyloveman, Compulsive, Johns Journey and Exponentially. Two crazy upsetters are the debut runner Brando the Birdman and the second-time-starter Cactus Shines.

Calameera is going to be the pick for race five, but contention runs deep. The three-year-old Powerscourt filly has speed and should be able to dictate the pace from post five. She may have company from Sallyana and the two could race gate-to-wire. They will need to get a head start on closers Joeandbetty'sbaby, Unseen Visitor and Midnight Lady.

The rails are out at 15 feet on the turf giving Volkonsky and China Prince the advantage in race six, an allowance race for California-bred or sired horses. Brown Boss is the threat from off-the-pace and could get a great set up if Ashley's Bambino and Very Unusual push to make the lead early from their outside posts. Those two could possibly clear Volkonsky and China Prince, leaving those two in the garden spot.

Trainer Mark Tsagalakis does not start many horses, but when he does, you have to take notice. Tsagalakis always has good stock and looks to have a good one in Oliver's Tale, a four-year-old colt that has one win and two seconds in three career starts. One of those seconds was to Points Offthebench, who would have been the favorite for the Breeders' Cup Sprint if not for his tragic break down. The only negative for Oliver's Tale is post as he must navigate a trip from the rail. The six furlong allowance looks to have drawn a lot of speed and that may set things up for Imperial Fortune, who is coming out of back-to-back route races. Justarunner is the stablemate of Imperial Fortune, both trained by Bob Baffert, and had the two best races of his career over the Hollywood Park track this summer.

No easy squares in the pick-6 on Friday including the finale, a maiden special weight race for two-year-old fillies going one mile on the turf. Abide in Me and Costamar should be out on the front end and look best to end the card. Sushi Empire has now run two sprints in her career and is ready to stretch out. She should get a good spot just off the speed. Kazam is a first-time-starter that may be better with a start or two while Exotic Behavior and Savings Account also make sense. Exotic Behavior and Savings Account must save ground as they will be breaking from posts eight and ten.

Perhaps it may be best to start looking at the card for Saturday as this wager may not be hit again. First post on Friday at the track of lakes and flowers is 3:30 pm ET with race three scheduled to go off at 4:30.