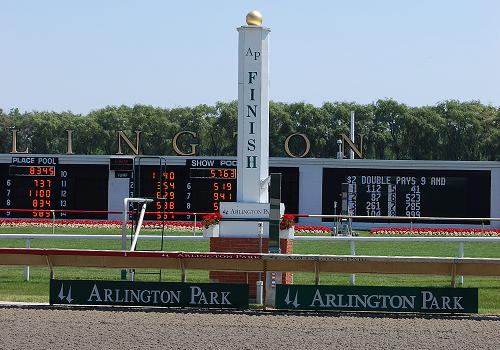 A pick-6 carryover of just over $31,000 awaits bettors on Wednesday at Arlington Park; let's take a short look at each of the six races that make up the sequence.

Race four is a state-bred allowance race for fillies and mares with Catafire the 5-2 morning line favorite.  The daughter of Latent Heat has been favored in all four of her career starts and has been a money burner in the last two.  She may be the favorite to start the day, but it's likely she's not the favorite once the gates open.  Brick House Road and Beauty of Scarlet exit a one-three finish in an open allowance race and are the two likely to be setting the pace.  Brick House Road would be overlaid if she goes off at her morning line of 4-1.  Little Mary E is the threat from off-the-pace if the two front-runners go crazy early.

Emile takes a dubious drop into the claiming ranks after winning a first level state-bred allowance race last month with other speed in the race, the son of Congrats looks like a bet against.  Daddyspentdamoney, Dustincase and Papascote are three long shots in the field and look like the runners that will be doing the best running late.  Tough race.

On the turf for race six with fillies and mares going the about one-mile distance.  Millennium Star and Rahab Your Soul just ran one-two in a lower level claiming race on the main polytrack, but both have wins on the turf.  Morioba is the threat to take them wire-to-wire while Midnight Lace drops into a claiming race for the first time since September 2012.  Midnight Lace has run three times in claiming races and has won two of them.  Viva Bertha looks to be working well in the mornings for her first starts since mid-September.

The Calder shipper Justcallmemoni holds the cards for trainer Wesley Ward in race seven, a maiden claiming race sprinting on the turf.  The daughter of Exchange Rate has had eight chances to break her maiden, but looks best of this bunch.  The one to fear the most may be the debutante Our Little Daisy, whose trainer has good stats with first-time-starters.

Reigning Catfish was 31-1 when he shocked a state-bred stakes race earlier this month and now shows up at 3-1 for Wednesday's eighth race.  It was the first win for the gelded son of Bellamy Road, who has sure taken to the synthetic surface.  A closer, Reigning Catfish must catch Looks to Spare, winner of his debut in mid-May, Viking, a stretch-out sprinter, Red Rose Cat, who two back won a claiming race in wire-to-wire fashion, and Tactics Best, who set the pace and finished second in a nine-furlong race last month.  Sancerre is another threat from the back stretching out from three sprint races as is Excellent Chance, who makes his first start against Illinois-breds.

Very rarely do you feel comfortable singling in the last race, but that may be the case for race nine where Hungry Wildcat looks to make it two straight at this level and three of his last four.  He should get a decent pace to run into with Denim, U Step Aside, Part'n Parcel and Groom all expected to be on or pushing the pace.  U Step Aside drops in class from state-bred allowance races and looks second best.  The son of Belong to Me has not run against claiming types since winning by five lengths in June 2012 and this race will be his third off the layoff.  Tab for his best.

First post at Arlington Park is 2:00 pm ET with the pick-6 scheduled to break from the gate at 3:28.  The pick-6 at Arlington has a $1 minimum, making it a very affordable wager.