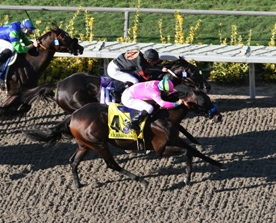 When racing resumes on Wednesday at Del Mar there is a very nice carryover of almost $240,000 in the pick-6 and it looks like a must play. Hopefully the outcome of this pick-6 won’t be decided five stories above the track.

The first leg is a maiden special weight race for two-year-olds going one mile on the turf and Taelyns Prince looks like a single. She ran like a horse that would love two turns in her debut and is bred to love the extra ground. Sunny Kat finished behind Taelyns Prince in that race and can improve second out while Station House has reportedly been working well in the mornings. Station House is trained by Richard Mandella who has only four wins with 49 debut two-year-olds.

On a non-biased race track, Streets of Heaven is the top choice; however, through the first week of the meet, speed has been dominant at this distance and the eight-year-old gelding has none. Instead look for Position A, Jim’s No Preacher, Blake and Iron Joe T to be battling it out early.

Race five is one of the most wide open maiden two-year-olds races Del Mar has and may ever see. The stats for most of the trainers in the race do not point to a win. Molly Pearson has a 17% strike rate with debut two-year-olds, but is winless in 10 starts in Southern California. Dan Hendricks is a 5% trainer first out, Sal Gonzalez has yet to win with a two-year-old firster, Gary Sherlock is two-for-thirty with two-year-olds making their second start and Steve Knapp has one win in 17 starts with two-year-old debutantes. Adam Kitchingman has Thunder Bonnet, who is likely to take most of the wagering action. Kitchingman is 11% winning trainer with two-year-old first-time-starters with two wins at Del Mar and one with Wednesday’s jockey, Victor Espinoza. Janet Armstrong is a three-for-fifteen debut two-year-olds, good for 20%, but two of the three wins were in 2009 and the other was in a two-furlong sprint at Santa Anita. Robertino Diodoro hits at 17% of his debut two-year-olds, but is winless with 16 starters in Southern California. Extra credit may have to go toward those with experience; Tom Kha and March Majesty.

Sweet Lulu has been nothing short of spectacular in her first two starts and is a future stakes filly. She was able to overcome the rail drawn in both of those starts, drawing off to win by a combined five and one-half lengths. Tab for a smasher in race six. Others to consider are graded stakes place Ondine and Bella Viaggia, who is two-for-two over the Del Mar main track. This is her first start around two turns.

Race seven is the restricted Wickerr stakes and we will take a more in depth look at that tomorrow as it is a wide open turf races. For now focus on Indy Point, Tigah, Corporate Jungle and Chips All In.

It certainly looks like a hittable pick-6 Wednesday where the turf meets the surf, so let’s all dive in. First post is 5:00 pm ET with race three scheduled to break from the gate at 6:09.