There are eight American-National stakes races on the Balmoral program on Saturday, November 9th. The Chicago Tribune calls Saturday's lineup "the best star qualify program in the 67 year history of Chicago harness racing." There are seven Breeders Crown race winners on the card, including Bee A Magician and Captaintreacherous.

Undefeated trotter Bee A Magician has had 15 wins this year and is penciled in for Horse of the Year. Pacer Captaintreacherous was a surprising second in his last outing, but his trainer is sure that it was because of a muscle enzyme inbalance that is corrected now. Before that, the Captain had only one other defeat out of 14 starts and looks to be the horse to beat if he's at the top of his game in this race. 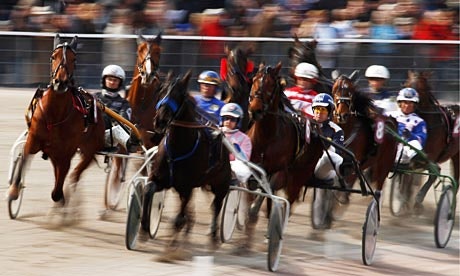 In race 9, Captaintreacherous starts from the 2 post with Tim Tetrick in the bike, as usual. His main competition looks to be Lucan Hanover in the 6 post, a classy rival who has run third to Captaintreacherous and has also run with some serious competition in the Messenger, Breeders Crown and Little Brown Jug stakes. A longshot bet in this race might be Apprentice Hanover in the 3 post, who has some good numbers for class and speed in some of his recent races.

The 6th race is a race to watch with Maven, standout female trotter, who will go up against the boys in the aged trot. She's ranked fifth in her class and has taken on some of the best female trotters of the season. Market Share, Uncle Peter and Mister Herbie are just three of the outstanding trotters she will be facing, but the morning line has her pegged for the second spot at 7/2.

In the 7th race, I Luv The Nitelife, winner of 13 out of 14 paces will face off against 9 other pacers from the 7 post, not the most advantageous one for a pacer, but she's certainly well qualified to handle it. Always About Katey, Auniqueacquisition and Charisma Hanover are probably the best of the rest in this one. The first two are well used to winning at Balmoral.

As always, safe trips and good racing luck to all the horses and drivers on the Balmoral American-National card. Don't forget to watch and wager on Bet America where bonus tracks pay rewards.