Lots of action in the Secretary's Choice stakes qualifiers that cover all but the 1st, 9th and 15th races. There are some familiar names here and also some newcomers to challenge the old guard. Here's a rundown of some of the races, probable favorites and likely contenders on today's program. 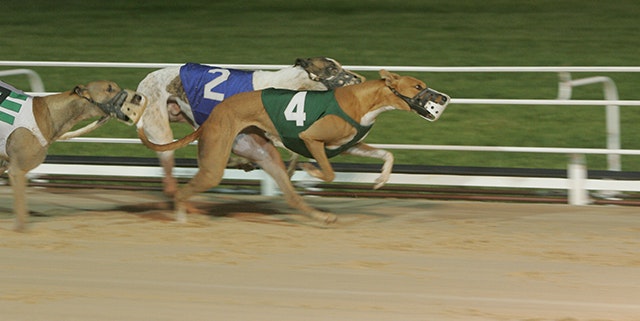 Race 2: Probable favorite is the morning line favorite, 5-Gable Esme, a Rhythmless female with her daddy's characteristic late rush style of hitting the winner's circle. Cut off in her last and probably mad as heck about it. Look for her to try to get even this time by bursting through the pack to hit the wire first. Another likely contender is 7- Loris Landed and 4-Kosugi.

Race 3: Probable favorite is 7-Proven History. 6-Gable Lo Mein has been in tougher races and has 20 out of 37 for the exacta.

Race 4: Probable favorite is 8-Chipper, although 6-Battin will no doubt have his backers also. 1-Classy Lad is back in the 1 box, where he won going away in A back in July.

Race 5: No clearcut probable favorite, although the 3-DK's All In and 8-PJ Junkindatrunk have been favorites in past races. The 8 looks good in the 8 box. 2-Boc's Derocker has some class.

Race 6: Probable co-favorites are the 4-Crunch Time and the 6-Bartssheswaycool. Most of the dogs in this race are solid grade A, so expect a hotly contested race.

Race 7: Probable favorite is 5-Topline Drive. Love that last line - the bomb exploded - commenting on a 12 and a half length win in B. I expect that the bomb might explode again and notch a victory in A this time, although I'd like him closer to the inside. 7-SH Limitless is a big moneymaker for Hardison and can't be counted out.

Race 8: Almost certain favorite is 7-Top Of The Pile with 16 wins out of 38 races. Second to DK's Flow Meter in stakes and beat SH Avatar and Chipper. Two to watch are 1-DS Ping Pong and 8-Boc's King Loopy.

Race 10: Probable favorite is 2-Keeper Depp. Although he lacks class, he makes up for it in ability to come in from anywhere and win by double digit lengths. Keep an eye on 5-JT Lover Lover, who is coming from route races. Could be the type of small female that benefits from that switch.

Race 11: Another race where the favorite could be one of several dogs. The morning line is probably as good as anything in this kind of race. Or the crowd's favorite at post time. 8-Boc's Sluicey has been in stakes races.

Race 12: Almost certain favorite is 2-DK's Flow Meter, the dog that wins more than half of her races, including the Bluffs Run Open here in July. I'm not going to bet against her. Competition could be 5-Coopers Combat and 8-Boc's John Luke.

Race 14: 7-SH Avatar will get the crowd's money in this one. 6-Sweet Finish is second in the morning line and has stakes experience. 5-Gable Olympus is switching from routes.

Watch and wager on Bet America where greyhound programs are free and bonus tracks pay rewards. As always, safe trips and good racing luck to all the greyhounds on today's program.