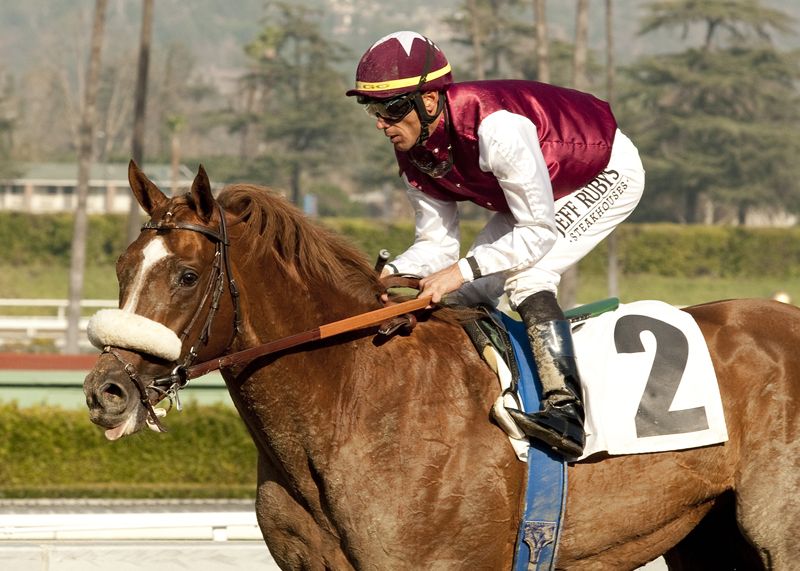 Out of Bounds Back on Track to Launch 2013 Carnival

Knocked off the Kentucky Derby (G1) trail last winter by an injury, the talented Out of Bounds will make his first start in almost exactly a year when he tops a field of ten set for the $250,000 Al Maktoum Challenge Round I (G2) at Meydan Racecourse on January 10.

The pace in this race likely holds the key to finding success. Keep that in mind.

The appearance of #3 BARBECUE EDDIE’s name amongst the favourites for this year’s renewal might shock those who haven’t been following the local season, but this guy is in the prime of his career, recording three consecutive wins (for three different jockeys), two of those coming this season, all on the Tapeta.

Form-franking aplenty surrounds Barbecue Eddie. The second home last time, Tamaathul, came back to win at Meydan while third-home Haatheq won by nine lengths at Jebel Ali, and has since run second there as well behind the well-regarded Treble Jig. From that December 5 race, Barbecue Eddie covered the widest trip, essentially going about 3.5 lengths farther than Tamaathul did. He might be at his very best at the ripe age of nine, and has given every indication he can handle this group. This season, he’s settled off the pace and advanced through the pack, waiting until the last possible moments in his last race before finding his stride and kicking on for home.

#1 OUT OF BOUNDS suffered a condylar fracture after trackwork last February while on the trail for the Kentucky Derby. He had defeated Breeders’ Cup Juvenile Sprint winner Secret Circle in the Sham Stakes (G3) at Santa Anita, a race franked when Secret Circle went on to win the Southwest (G3) and Rebel Stakes (G2) in his subsequent starts, before a second in the Arkansas Derby behind Bodemeister. At the time, former trainer and Dubai World Cup winner Eoin Harty called him a “one-in-10,000” horse when interviewed by the Daily Racing Form’s Steve Andersen. That counts for something – but we’re iffy in here.

What you get from him today is anyone’s guess off the layoff, on the Tapeta, and he is in against older (in Barbecue Eddie’s case – much older) horses. He was never medicated with Lasix in his US starts, a heartening sign, and potentially a reason to give him this goal now. A short price cannot be accepted, and he’s likely to be shorter than he should. Still, this isn’t the toughest renewal of this race, by far. He should go close to the front with the early gallop.

#10 MURAWEG is wildly intriguing here for the Bahraini, Fawzi Nass, who of course owned and trained the winner of last year’s Dubai Golden Shaheen, Krypton Factor. He came flying at the end of his local debut off a layoff and five consecutive Bahraini wins. He needed that last race for sure (where Ganas continued a hot streak winning his third consecutive), and the connections reported he would need a trip over slightly longer. This isn’t the 1,400-meter trip they suggested he would need, but he showed he can be competitive and was fine on Tapeta, which is more than we can say about some others in this spot. That last race was fast, and it really set up for Muraweg to come running – it could just be a question of the pace.

In the end, it’s going to be Eddie for us. The overall quality of this field is not so supreme to be over his head. The pace should be well within his reach. We think Out of Bounds could win, and win easily if he is as good as he was as a 3-year-old, but the question marks are there.