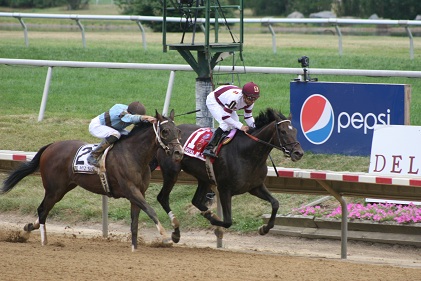 The race with the most prize money this weekend is not one of the three-year-old stake races; it’s the Dubai World Cup, which is the richest race at $10-million.  That’s right, $10-million.  This year’s race drew a field of 13 with the U.S. based runner well represented.

Royal Delta ran in the World Cup last year and finished ninth, beaten just over eight lengths, but this year she is better and stands a great chance of beating the boys.  She will have to out finish Animal Kingdom, who is reportedly working out of his skin over the Meydan track right now and is ready to run the best race of his career.  Joel Rosario will not make an early move this time, you can count on that.

While the Americans bring in a great threesome, it is still the Euros race to lose.  Monterosso won this race last year, but is not coming into the race this time as well.  Instead Hunter’s Light and Kassiano have taken over as the ones to fear the most.  They just finished one-two in the third round of the Al Maktoum Challenge, which is the local prep for the World Cup.  Another to consider is African Story, who has won six of his 14 career races and is coming off an easy two and one-quarter length win in the Group 3 Burj Nahaar.

It should be a spectacular World Cup with the action getting underway at 9:10 A.M. ET.  Also on the day are the seven other graded stakes races with U.S. horses throughout.

Look for Alpha in the Godolphin Mile, Dice Flavor and He’s Had Enough in the U.A.E. Derby, Great Attack in the Al Quoz Sprint, Trinniberg and Private Zone in the Golden Shaheen and everyone’s favorite little gelding, Little Mike in the Duty Free.