Six races on this evening's program will cut the field of entrants to 24. Next Wednesday afternoon, those runners will compete in the 3rd round of the series, with the finals to be held on Saturday, September 28th. 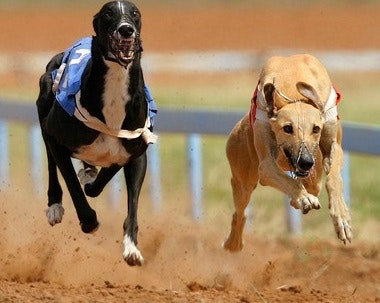 Six greyhounds are tied for 20 points each at the top of the standings:

Some observations on these races:

In Race 2, Quirky Darius is in the 7 box, where he seems to have to struggle to get the inside, which is where he wants to run. He may jump out to the lead in this one, and/or get to the first turn ahead of the other dogs and trouble, but he may not. If he falters or hesitates, there are other dogs with early foot, including the 5-LC Emerson and even 6-Superior Weapon, who won from the 6 box before.

Race 4 has two of the top point earners, 1-UB Truckstop Bob and 6-Superior Marine. Both are able to run from either inside or midtrack. And both have wins with good margins. 5-JD Embellish, although lacking class, looks like a threat if he gets in front.

4-Mymotorsrunnin in Race 6 ran a very strong race in the first round, padding his win margin by 4 lengths from the 3 box. He's one of those dogs that doesn't burst from the box, but instead almost hesitates, but then gets up to speed and closes in the stretch like a freight train. 7-WS Mr Pibb is also a closer, but runs nearer to the leaders and just missed last time out. 2-Boc's Thorpedo has had first turn problems, but if she doesn't, can certainly figure in the exotics.

In Race 10, 4-Blazinzealous and 5-Killer Carew are side by side and willing to take an inside or midtrack route, depending on where there's room for them to run. Killer Carew has the class and a 9 length win in her last race. 8-Sound The Alarm is right where she wants to be on the outside and will be looking for room at the rail and a chance to get there before the others do.

In Race 12, 2-L's Beach Bride has class and speed and looks to be the one to beat. Morning line and Railbird, however, pick the 8 first and 7 second, and they probably know more about Dubuque than I do, so watch the odds.

In Race 13 , the class dog is 4-Superior Korbina, although she's been struggling a bit lately. 7-D's Racine has class also and if she gets the inside, might be a threat. 1-Go Lucky Ashlee, the Classic Champion, should not be overlooked or underestimated in this race.

As always, safe trips and good racing luck to all the greyhounds on tonight's program. Don't forget to watch and wager on Bet America where greyhound programs are free and bonus tracks pay rewards.