The BC Sire Stakes Final for 2 Year Old Fillies wraps up in Race 1 at Fraser Downs on Friday October 11th. Five fillies will compete for a purse of $50,000. While there's a very low odds favorite, this IS a race for two year old fillies and it's been my experience that anything can happen when the fillies compete. 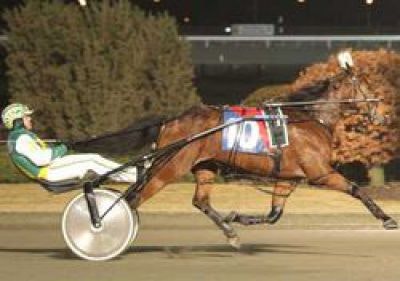 Run And Tell at 8/5 in the 5 post, which has a big advantage at Fraser, is trained by Debra McCarthy, who has 28% for wins with 2 year olds. The Power of Art-Kents On Nuke filly, driven by Kevin Anderson, is moving down in class and has won two out of three at Fraser and three out of four lifetime. Her numbers are better than the rest and she looks like a logical bet, although you won't get much value. Her last race was run on a sloppy track, so take that into consideration when you handicap.

In the 4 post, Go To The Windows at 3/1 in the morning line, also has two wins out of three races at Fraser. She's trained and driven by Dennis Johnston and is out of All American Cobalt and Artsplace, a very good combination indeed. Johnston has driven her to both of her victories. She hasn't shown the speed that Run And Tell has shown, but has been improving steadily.

Jay Majic, in the 1 post at 4/1, out of Youdon'tknowjack and Cambest, is driven and trained by David Hudon. She's had three races at Fraser and has one show, in her last race here. She was within one length of the winner and left smartly and ran a very competitive and competent race for a two year old. If one of the favorites falters, she could be there to pick up the pieces.

Shales Meriya, in the 2 post, out of Warrawee Hero and Just Camelot, also has one show out of three races at Fraser. Driven and trained by Jim Marino, this filly had an extreme outside post last time out and can be forgiven for struggling in that race. Her numbers aren't up to par for this race, so unless she improves dramatically, I wouldn't expect her to be up with the leaders this time out.

Miss Ruby Jean, in the 3 post, is another All American Cobalt filly. Her dam is out of Armbro Meadowlands and she's driven by Bradley Watt for Susan Allan. She showed some ability in her last race, when she was parked out and managed to stay in contention for a couple of calls. Look for her to improve, if not in this race, then as she progresses in her career. Note also that the last race was run on a sloppy track and neither her dam nor sire were partial to off tracks.

As always, safe trips to all the drivers and horses on tonight's card. Don't forget to watch and wager at Bet America where bonus tracks pay rewards.