It's a big night of stakes racing at Hoosier Harness Park on Friday, November 1st with 9 stakes races, including a couple of consolations. The first race gets things started with some up and coming 3 year old fillies who have some pretty impressive credentials. 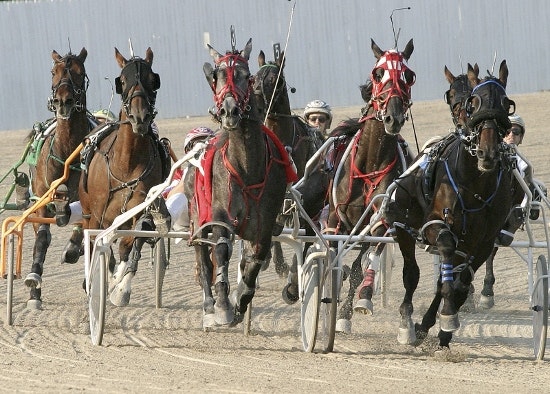 The morning line favorite 8-Bouncing Bax at 5/2 with Scott Zeron driving for Jim Rayner was a standout in the NY Sire Stakes back in August and September at Yonkers, Saratoga and Monticello. At Pocono, a five-eighths track, she struggled in the Breeders Crown Elims.

What she'll do at this seven-eighths mile oval is anyone's guess, because she hasn't raced here before. Neither has she had Zeron in the bike, although she has been in the money 85% of the time under trainer Raymer's supervision. The outside post position in a trot won't hurt, but I still have reservations about considering her the prime contender in this contest.

3-Lady Laker at 3/1 in the morning line is very comfortable at Hoosier with 3 wins and a second out of 5 races here. Peter Wrenn has driven her to two firsts and a second for Al Tomlinson and to a win for Kara Buxton before that. Victorious in the Sire Stakes by 15 impressive lengths, this filly also finished the race before that in front by 14 and a half lengths! If the rest of the field lets her loose on the lead, they may need binoculars to see her by the time they hit the stretch.

4-Andie Sophia the 7/2 third favorite in the morning line, has one win and one show at Hoosier, so she knows her way around the track. She's had a win in the Hudson Final, was third in the Buckette and also third in a Kentucky Sire Stakes race back in August. Her speed numbers are good and she's raced against similar class rivals before.

She and Little Bitty Lies were beaten favorites in their last races and Andie Sophia has the best earnings per start of any of the horses in this race. Tyler Smith drives her for Krista Williams, who excels at training trotters with a 29% win rate and 58% in the money with them. Leave this filly out of your exotics at your own peril.

5-Gliding To Glory at 5/1 in the morning line is trained by Rich Gillock and driven by Richard Stillings. A stranger to Hoosier, this filly has raced mostly at The Meadows, although she did get a second at Pocono in the Sire Stakes there, losing by only a head. Her pedigree and record of 2 out of 3 on an off track suggest that you give her a closer look if the weather turns rainy on race day.

7-Little Bitty Lies a Marcus Miller/Erv Miller entry is at 6/1 in the morning line. She handled the mile track at Balmoral with no trouble, with a win and a second, but hasn't been tested at Hoosier before, except for a 6 horse qualifying race back on September 18th, that she won by three quarters of a length with a 158 even. She's taken the wide path in her last two races, so given a better trip in this one, might hit the board.

2-Ruffleshaveridges 8/1 in the morning line, with Ed Hensley driving her for the first time and Rick Beinhauer training is also a newcomer to Hoosier. With 4 wins out of 14 races this year, including a win in the PA Sire Stakes at Harrah's Philadelphia, this filly is frequently in the exotics and has the highest speed rating of the field in her last race. She also seems to be struggling of late, maybe another victim of the doldrums that can hit 3 year olds late in the season.

6-JH Jessica Ron Burke's entry in this field has Rick Macomber driving and is at 8/1 in the morning line. Winless this year, she has had a win at this oval and also two seconds and a third, out of six races. Keep in mind that this filly is lightly races this year with only 4 races since coming back after a layoff in September. There might be more here than meets the eye as there so often is with Burke's entries. He's at the top of the trainer standings at several tracks for good reason.

1-Jessie E is definitely moving up in class in this one. She's also had a problem with breaking stride in several of her races, perhaps because she was in over her head in them. Starting from the extreme inside post rarely helps a trotter do her best, so I can't recommend her in this contest. She's at 12/1 in the morning line and has David Miller driving for Steve Carter.

Safe trips and good racing luck to all the horses and drivers on tonight's card at Hoosier Park. Don't forget to watch and wager on Bet America where bonus tracks pay rewards.