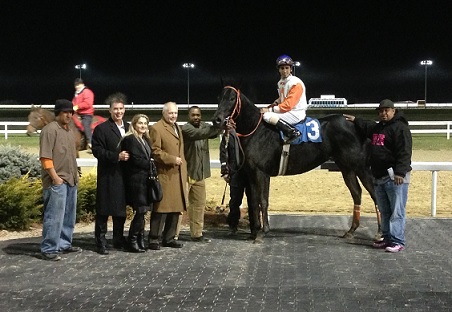 The first leg of the late pick-4 on Friday, Black Eyed Susan day, at Pimlico is the $100,000 Jim McKay Turf Sprint for three-year-olds and upward going five furlongs.  The race drew a field of eight, but is expected to come down to the two favorites, Bridgetown and Ben’s Cat, pictured right in the winner's circle after scoring by a head in the Fabulous Strike Handicap last November at Penn National.

Last year Bridgetown had a solid campaign starting six times with two wins, two seconds and a third.  The only time he ran poor was in the Grade 1 Breeders’ Cup Turf Sprint over a course that many aren’t able to negotiate.  He won the Grade 3 Woodford at Keeneland and was second in the Grade 3 Turf Sprint at Churchill Downs.  Often times we don’t know how the horse will come back off a layoff because there is no past layoff lines, but Bridgetown is the exception.  In five starts off a layoff the six-year-old has three wins and two seconds.  He came off a similar layoff last May when he finished second in the Turf Sprint as the post-time favorite.

Now on to Ben’s Cat, the only millionaire in the field, who is likely to start the post-time favorite with all of the local support.  The seven-year-old gelding has run an amazing 30 times with the even more amazing 20 wins.  He has won over fast dirt, wet dirt, firm turf and soft turf.  This would be the horse any owner and trainer would love to have.  It’s a shame that he has not been able to run on the big stage, the Breeders’ Cup.  Ben’s Cat is three-for-six over the Pimlico turf course and is looking to improve on his fifth place effort in Jim McKay last year.

It looks like we start the pick-4 off with two horses; tomorrow we look at the other turf sprint in the sequence, The Very One.