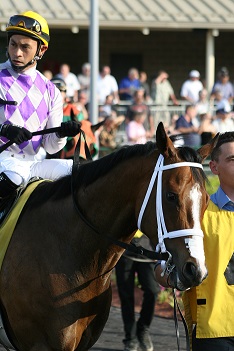 Not a lot of racing going on Monday, but there is an interesting little stakes races at Presque Isle Downs in Erie, Pennsylvania. The five and one-half furlong Karl Boyes Memorial will be run for the seventh time on Monday and it drew a pretty salty field. Morning line favorite for the race is Next Question, who just ran on Friday at Belmont Park.

The race in which Next Question ran in was the Jaipur, which was originally scheduled for the turf, but due to heavy rains was moved to the main track. It almost appears as if Next Question used the race then as a workout, but entries for this race were drawn on Wednesday so trainer Michael Trombetta could also scratch his gelding and wait for another race down the road.

The horse to catch, and likely favorite if Next Question scratches, is Sum of the Parts, who has yet to taste defeat in three starts on a synthetic surface. He won the Tom Ridge Stakes over the track last year as well as an allowance and the Grade 3 Phoenix at Keeneland. The Speightstown colt has disappointed in his last two races and looks to rebound on the surface switch.

The problem for Sum of the Parts is not only recent form, but also the pace scenario of the race. Joining him on the front end will be Go Blue Or Go Home, Mega Rush, Grand Old Game, Dazzled Saint and perhaps Poseidon’s Warrior off the six month layoff. Poseidon’s Warrior won the Grade 1 Vanderbilt Handicap last year at Saratoga over a muddy course, but may need a start off such a long layoff.

The horses that benefit from a fast pace are Kyma, pictured, Occasional View, Super Chunky and Greek Warrior. Kyma ran on June 1 in the Pennsylvania Governor’s Cup at Penn National and after finishing fourth in the race, was disqualified and placed last. After watching the replay a case could be made the horse that bolted overreacted to Kyma who came up on the heels of a horse in front of him, which would not have been the fault of Kyma. If runs nine days back watch out because the five-year-old gelding has won three of five over the surface.

Occasional View exits a win over the track and distance where he was 1-5 and drew off to win by two. It was a good effort for the gelding who was fifth in a Grade 2 over the turf at Woodbine in 2011.

Super Chunky has not won a race since September 2011, but will be closing while Greek Warrior comes off a win in a five-furlong turf sprint at Pimlico last month. He is making his synthetic surface debut, but should handle the surface switch.

A lot of ways to go in this race and that’s a good thing because the race kicks off the Monday late pick-4. First post at Presque Isle is 5:25 pm ET with the Boyes Memorial scheduled to break from the gates at 7:05.