The Mayflower Melee Sprint Stakes kicks off in races 7 and 9 at Orange Park on Wednesday night, November 6th. The two SA contests have some very classy dogs contending for a spot in the finals on Saturday, November 9th. Also on tap on Saturday the 9th is the Final of the Wheeling Distance Stakes. 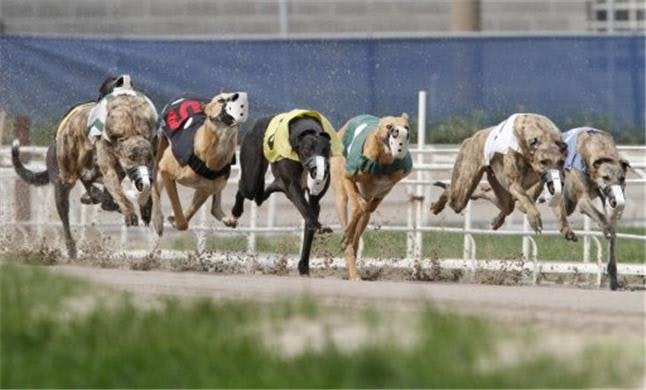 In Race 7, there are 3 solid A dogs in the 4, 5 and 6 boxes. 4-Kiowa Red Brook has 7 wins and 3 seconds out of 17 races, so she's definitely one for exotics. Out of Flying Coal City, she runs for the Connell Kennel and prefers to run the rail. Her biggest challenge is the way she gets bumped so often. She needs to work on that.

5-Pat C Gatsby is a midtrack runner that is quick out of the box and very agile at getting around the first turn without running into trouble. He can close as well as break, which makes him a potent threat early and late. This may be why he's at 2/1 in the morning line.

6-Kiowa Davy Jones, while straight A all the way, is at 12/1 in the morning line. He has 25 out of 68 for the exacta and is in the trifecta more than half the time. The 6 box isn't a good one for sprints though and he doesn't have a lot of early kick, so he'll have to really boogie to beat the box or get a good position for the first turn.

1-T's Chuggingalong is one of two dogs in the race that have dropped down into Grade B and won within 3 races. This is a spot play that often wins within its next 3 races. She loves the rail and can really break, but she tends to get into trouble on the first turn. A familiar story even with dogs that hug the rail, because so many other dogs do that also on the turn. She's at 7/1 in the morning line.

The other dog that dropped down into Grade B and won within 3 races is 8-Time For Tootsie, who might be a sleeper in this race at 5/1 in the morning line. She likes the 8 box. It's where she won from in Grade B. She's a hard closer and needs to have room to do her best. With no greyhound to her right, she might have the space to race in this one and show up on the board at the end.

2-WW's Chick A Dee is a solid exacta bet. She always puts in a serious effort and can't be left out of exotics. She's at 7/2 in the morning line for a reason and runs for Red Oak Racing Kennel.

Race 9 is one of the hardest races to handicap that I've come across lately. All but two of the entries are solid Grade A all the way and the two that aren't are spot plays that dropped down and won within 3. Outside of suspecting that the 6-RCK Eliminator and the 8-GS Not Cracker might get in there for part of the payoff, I'd have to say that the morning line is probably as good as any guess I could make on this one.

As always, safe trips and good racing luck to all the greyhounds on tonight's Orange Park card. Don't forget to watch and wager on Bet America, where greyhound programs are always free and bonus tracks pay rewards.