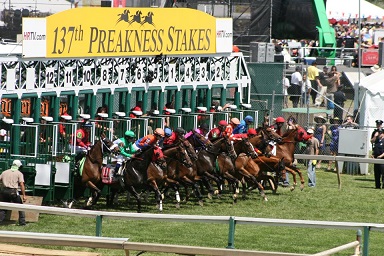 The second leg of the late pick-4 on Friday at Pimlico is the feature Black Eyed Susan, but we are going to wait for Friday’s blog to analyze that so let’s move on to the third leg, the $100,000 The Very One stakes for fillies and mares going five furlongs on the turf.

Unlike the Jim McKay, The Very One drew a full field of 14 and even though Sweet Cassiopeia headlines the field, contention runs deep. Sweet Cassiopeia is in the midst of a five race win streak that dates back to last September and includes three turf sprints. She was scratched out of the Unbridled Sidney at Churchill Downs two weeks ago likely because of the less-than-firm turf course. She will get the firm turf on Friday, but post 13 of 14 is not ideal.

The last race Sweet Cassiopeia ran in was the Giant’s Causeway at Keeneland, a race she won by a length and one-quarter. Also coming out of that race into The Very One are Spun Cap, Sounds of the City and Sensible Lady, who finished two-three-four behind the winner and all have a shot to upset.

Spun Cap made the lead at the half, but could not hold off the charge of Sweet Cassiopeia. That was the first time since her third career start that she made the lead early and both times she has lost. Jockey Joel Rosario must sit on her a bit longer and wait to make one late run.

On paper, this race is going to completely fall apart. Quality Lass from post two is speed as is Nechez Dawn, Nastar Medallist, Mosaicist and Too Clever by Half. They may just get into each other’s way and set it up for a closer. Sweet Cassiopeia comes from off the pace, but does like to lay close. Sensible Lady and Sounds of the City are closers as are Queen Chatanika and There Is No Limit.

There Is No Limit is the pick to upset the apple cart, or at least hit the board at a price. The six-year-old mare gets back to her preferred surface, turf, and will be running like a freight train late under jockey Rose Napravnik, who knows her way around the Pimlico course.

Not at easy race for the third leg of the pick-4, let’s try to beat Sweet Cassiopeia and then hope for another price in the other legs.

Tomorrow we tackle the final leg of the wager, the Grade 3 Pimlico Special featuring Eightofasttocatch.