The feature race on Saturday at Louisiana Downs is the Grade 2 Super Derby for three-year-old colts and geldings. The nine furlong race drew a field of seven led by morning line favorite Departing.

Departing is even money on the line and is likely to go off shorter than that. The War Front gelding has won five of his seven career races including win in the Grade 2 West Virginia Derby and Grade 3 Illinois Derby. He is the class of the field and can adapt to any pace scenario, which may be a slow one. 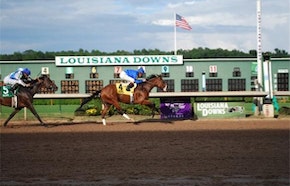 Cameo Appearance may get away with an easy lead under jockey Patrick Valenzuela and would wire the field. The Wayne Catalano-trained colt has won two of four races in his career and will be making his two-turn debut.