There are two divisions in the Keystone Classic in races 8 and 10 at The Meadows on Friday afternoon. Two year old colts and geldings race for a purse of $50,500 and there's plenty of talent on display here. 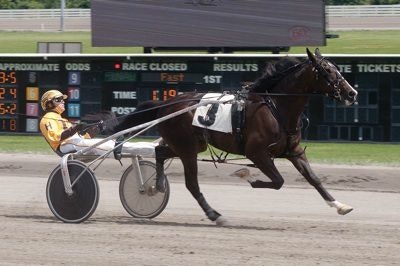 In Race 8, morning line favorite honors go to 8-Monkey Man, but at a conservative 3/1. With four wins out of six races, and two out of three for wins at The Meadows, he looks tough even from the extreme outside. Dave Palone drives for Michael Palone and they have a win percentage of 40% together. Don't expect the Glidemaster-Sierra Kosmos gelding to go off at the morning line odds, that's for sure.

Amped Up Hanover in the 6 post has one second out of two races at The Meadows and looks like a good choice for exotics. Mike Wilder takes over the reins for John Butenschoen, who has 21% for 2 year olds.

Upfront Billy Boy with Brian Zendt driving for William Zendt has the awkward 1 post, but has handled it before and only lost by a neck doing it. He has a good record at The Meadows, with one first, two seconds and a third from six races, so you might want to pencil him in for exotics too.

Faust, another Glidemaster gelding out of Credit Winner, has Jim Raymer driving and training with very good stats for 2 year olds and moving up in class. Keep an eye on this one if he gets a chance to show what he's got.

Explosive Cash is able to close, when given the chance, and has one second out of three races here. Look for Palone to try to go to the lead and control the pace here.

In Race 10, Monte Cristo Spur with Richard Stillings driving and training is the morning line favorite at 3/1. The Cantab Hall-Malabar Man colt has two out of three for wins at The Meadows and two out of six for wins this year. With over $78,000 in earnings this year, this colt has some fast times in his lines. Whether the 1 post will slow him down remains to be seen.

Once again, Dave Palone has the 8 post. He's driving Who Wants Soup for Jim Campbell, who has 22% for wins for 2 year olds. The Explosive Matter-Garland Lobell gelding has a third at The Meadows out of two races, but has won at Pocono and Harrah's in sire stakes against some pretty tough competition.

Master Bedroom, one of the best names I've seen for a harness horse lately, has Victor Kirby handling the reins for Jim King Jr. It's hard to say how the Glidemaster-Muscles Yankee colt will take to The Meadows, because he hasn't raced here before. He got a second at Pocono and two wins, one second and two thirds at Harrah's. With good closing ability and good speed figures, this colt could be there at the wire.

Overwhat with Aaron Merriman for Bruce Riegle has been hitting the board at The Meadows with a place and three shows from six races here. Merriman is a very competent trot driver and will have this one up to the mark, if possible.

Monte Cristo Spur really does seem to be the class act here, but this is a 2 year old trot and he is on the inside, so it might make sense to hedge your bets here and look for other horses that can meet the speed requirements, like Master Bedroom, Who Wants Soup and even Uriel, who has won here before.

As always, safe trips to all the drivers and horses on today's program. Don't forget to watch and wager on Bet America, where bonus tracks pay rewards.