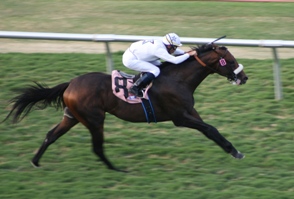 The feature race on carryover Wednesday at Del Mar is the $90,000 Wickerr Stakes for horses that have not won a stakes of $50,000 since May 1 and that deadline is an important one. After scratches a field of eight will break from the gate; let’s take a look.

The morning line favorite for the race is Corporate Jungle, making his first start in Southern California since June 2012 and only second start for trainer Tom Proctor. His closing style suits the turf course profile, but he made need a race to show his best.

Chips All In is coming off a layoff of three months, but he loves a little break in between his races and the four-year-old North Light colt has been training lights out in the morning. Expect jockey Julien Leparoux to sit just off the pace of My Best Brother, a Grade 2 winner over the course. My Best Brother is two-for-two at a flat mile and is the speed of the speed.

Two viable long shots, and they may be shorter on the board come post time, are Indy Point and Tigah. Indy Point is a new shooter from Argentina and reportedly has been training exceptional in the mornings. Not too much can be gained from his running lines except that he is a good one.

Remember the May 1 deadline? Well Tigah won a Grade 3 race at Golden Gate on April 27, just under the cut-off date. He is fresh and will be closing like a freight train late.