Earlier this month, Evangeline Downs held 14 trials for the $1 million LQHBA Breeders Futurity (RG1). Despite rain and a sloppy track condition, ten of the fastest and most accomplished accredited Louisiana-breds will return on Saturday night to compete in the richest Quarter Horse race in Louisiana.

Michael Taylor’s Jet Black Rogue posted the fastest time of the night with a 19.923 clocking in the second race of the night. That time equaled a speed index of 90 over the sloppy track with Joe Badilla Jr. in the saddle.  Jet Black Rogue has now won four of her six lifetime starts. Her first career start was a win in a trial for the Louisiana Lassie Futurity at Delta Downs on April 24. While she ran seventh in the final, that was the only off the board result in her brief career.

Veteran Quarter Horse jockey Danny Lavergne had made the decision to hang up his tack at the end of last year. His goal was to set up an equine training center in Vinton and leave the riding to the younger guys. That decision changed when he saw the talent of a Jess Louisiana Blue filly by the name of Jessa Louisiana Zoom in schooling races at Delta Downs.  Bred by Lyle Guillory and owned by Jason Richards and Michael Leblanc, Jessa Louisiana Zoom won both the Lassie Futurity and Lee Berwick Memorial Futurity at Delta Downs. Trained by Frank Cavazos, she was freshened over the summer and returned to action on November 6.  Despite being bumped in her trial and finishing second, she still notched the third-fastest qualifying time of the evening. 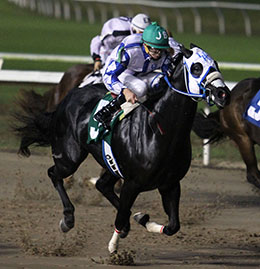 Up and coming Quarter Horse trainer, Trey Ellis qualified four runners, including Toastin With Coronas, a filly who will be ridden by AQHA Champion jockey, G.R. Carter. The $445,000 check for the winner would be the biggest payday for the 25-year-old Ellis.

Post time for the Saturday, November 28th card at Evangeline Downs is 5:35 pm (Central). In addition to the seven-figure futurity, two additional stakes will be contested. The seventh race, the $40,000 LQHBA Breeders Juvenile, is a consolation for the 11th -20th fastest qualifiers for the futurity and race eight is the $267,171 LQHBA Breeders Derby.