After all the talk and debate for the last few months about this Tournament, it's time to decide it on the field as the 50th Annual Bob Balfe Puppy Stakes Final is finally upon us.  One of the most talented finales you'll ever see here has a fantastic chance to be a classic.

Here's a rundown of each finalist and the odds we believe each athlete will go off at post time around 4:00 this Saturday afternoon at "The Beach." 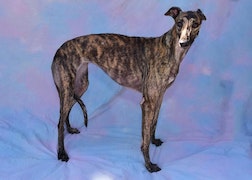 Has been really impressive since the Tournament started.  Two wins and a place rolling into the Final, plus the hot 1 box to fire from has her Team from Rader Racing thinking about yet another championship. 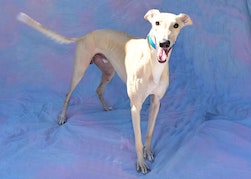 The post draw winner without question.  The "Little Red Machine" is just lethal from a rail position with a 75% career winning percentage from the 1 or 2 hole.  Will be the favorite at post time and he should be.

Most likely will be Red's final race here as the plan all along has been for him to eventually race at Wheeling Island Race Track in West Virginia. Will he roll out of South FLA with this trophy? 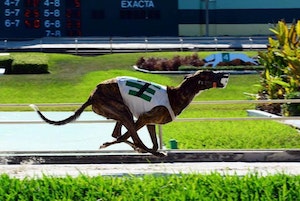 Hot start to his career, scoring in 8 of his first 14 races.  Draws the tough 3 box, which has the lowest winning percentage of any other hole at Palm Beach.

Host of The Backstretch Show on 95.9 FM The Palm Mike Balsamo may not let us ever forget this one if his original pick Sentinel wins 20 G here.

Kate is in a nice spot in this race.  Love mid track and should be able to be right near the front at the curve. Solid rush and close combo and an already accomplished A Grader this season.

Most likely will be the longest shot on the tote board, but watch out if he gets any kind of break here.  Has the most dynamite close of this Final, breaking close to last at the start and finishing in either first or second consistently throughout the Tournament. 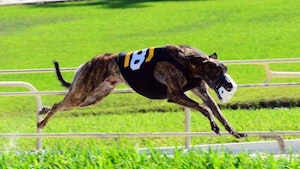 "Big Mac" comes into this Final en fuego.  Three straight Tournament wins has the young Blu Too Kennel thinking about their first championship in South Florida.  Would be quite a story if Tarmac can pull this off.

Remember that Atascocita Clo won from the same yellow box last year in this Final. 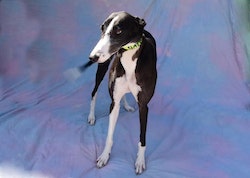 Superstar owner Shannon Henry is back once again in a Stakes Final to the delight of a worldwide fan base.  "Gator" will need the break of her life to have a chance here but did show promise in the opening rounds winning them both, including a Tourney best 29.22 secs run. 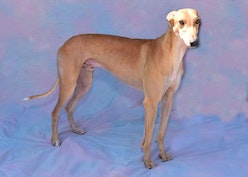 The third entry from Rader Racing could find success from the outside, especially if the early speed misses. Did win two qualifying rounds to stamp his place in this Final.

Russian's mom is one of my favorite Palm Beach racers of all time in Flying Rushin By who retired in 2013.

I knew there was a chance that an early favorite would miss the Final, but having Blu Too Ataree & Wiki Ray Donovan both out in the semis was an absolute stunner. Ataree will be rooting on his brother Tarmac I'm sure Saturday.

Rader Racing will be going for their third straight Puppy Stakes Title this season, after scoring victories with PJ St Pierre on Labor Day and Kay Beowulf in last December's Futurity.  Rader is also the only Team to ever win the modern Puppy Stakes Triple Crown in history, when back in 2007 Drum Thunder, SK Brooklyn & Nobooth For Gary all brought home the hardware in their Tournaments.

This BetAmerica columnist is going for three straight correct Stakes predictions after we scored victories in the 3/8ths Mile Derby & St Pats Invite.

I picked Kinda Cruel Red from the beginning and I'm still on him here.  Drawing the 2 hole only has me liking it even more.  Another championship goes to Janie Carroll's Team in the golden anniversary of this Tournament.

Good luck to all Finalists & Teams!  It's been an exciting tourney full of great action with no shortage of entertainment. We'll probably look back on this race later on and realize just how many future stars ran in this Final.  Expect a thriller.