2014 Awesome Again: Should We Believe in Shared Belief?

by Molly Jo Rosen
You cannot have a more perfect record than Undefeated. It literally means "without any losses."

So it makes perfect sense that Shared Belief - our reigning 2yo champion who is 6-for-6 lifetime - enters the G1 Awesome Again with the ultra-short morning line price of 3-5.

I've said it before and I'll say it again... it's incredibly hard for a horse to win one race, let alone two in a row, so to pull a Zenyatta (19 consecutive wins), a Cigar (16), a Peppers Pride (19), or even a Rapid Redux (22) is phenomenal. There are just so many things that can go wrong in a race: it's definitely something to celebrate when a horse has the talent, skill, and luck to string victories together.

But before we anoint Shared Belief the second coming of Secretariat, let's remember that he may not even be the best of his generation. This group of 3yos is really good and they've managed to stay pretty sound: from California Chrome's six-race streak earlier this year, to the improving Bayerns, Tonalists, and Wicked Strongs of the world (and those are just the dirt males).

It's easy to say the dark bay son of Candy Ride is a single in the Awesome Again and move along to building a Pick 4 ticket around him. But we're handicappers: we're not supposed to take the easy route 99.9% of the time.

I think so and here's why: it has nothing to do with the rest of the field's ability (though I do think we'll get juicy prices on a few live longshots like Footbridge and Sky Kingdom).

Shared Belief will get himself beat one of these days. It won't be his or trainer Jerry Hollendorfer's or jockey Mike Smith's or owner Jim Rome's fault: it's racing luck. Eventually a horse will lose (or be retired in the case of Peppers Pride). Unless you bow out at the peak of your streak, it's inevitable that someone else will cross the wire in front of you ~ and this guy's a gelding, so there's no stud value to run off to cash in on.

If you're looking for a reason other than racing luck to play against 'Belief, here's something: his margins of victory are shrinking.

True he's still winning by comfortable distances, but the space between him and rivals at the last point of call has gone from 7 in his debut to  7-3/4 in his second start (and first stakes try) to 5-3/4 in the G1 CashCall Futurity to 4-1/4 twice (including his first start v. older & off the layoff) to 2-3/4 last out.

This could be explained by several factors: stepping up against tougher company, stretching out to longer distances or trying new surfaces (even though he had raced on synthetic before, Del Mar's Polytrack v. Golden Gate's Tapeta are not the same mix of materials). Or it could be that he's still the same talented horse and others are catching up to his level of ability. 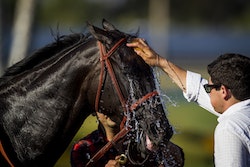 Whatever happens with his win record, Shared Belief is a talented athlete, fun to watch and great for the game (especially since his co-owner Jim Rome of Jungle Racing is one of the sport's best ambassadors). Plus - barring injury - we should get the chance to cheer the gelding on for at least another year.

But - just like when handicappers struggled with Zenyatta - there is a difference between Cheering For and Betting On.

Will you be betting Shared Belief this weekend?