Bob Baffert has won the last 3 runnings of the Breeders' Cup Classic. In 2014, Bob took home the BC Classic Trophy with Bayern. The following year saw Bob's Triple Crown winner, American Pharoah, romp in the BC Classic.

What happened last year? Baffert brought the best horse in the world to the Classic. Three-year-old Arrogate beat superstar California Chrome in one of the most thrilling Classic stretch runs of all time.

Baffert's not only back with Arrogate in 2017, he also brings this year's top three-year-old to the Classic party, West Coast. I believe Arrogate and West Coast have huge chances of winning the Classic on Nov. 4. My top pick is a different horse from Bob Baffert's barn, though. Keep reading to find out why I prefer Collected as my key horse for the 2017 BC Classic.

Did Collected get an easy lead in the Pacific Classic? Sure, he did. But, he doesn't necessarily have to run up front. Not only that, I think he improves off the P. Classic win. I expect Collected to either get the easy lead, or coast a length off Gun Runner. There's a not of ton of other speed signed on for this. He's good enough to put away Gun Runner and then go on with it.

I guess, West Coast must improve. That's what other horseplayers have told me when I said I think West Coast is the lone horse that's going to be close enough to Gun Runner and Collected to run by both of those horses. Based on how West Coast has performed so far this year, I see him possibly improving enough to beat Collected. Let me put it this way, I'll definitely have both Collected and West Coast in the top spot on all my BC Classic exotic tickets. That's a for sure.

I'm impressed with Arrogate's run in the Pacific Classic enough to put him in my Top 3. I'm not sure if he likes Del Mar enough to show his best, though. The thing that bothers me about Arrogate is how it took so long for him to get going in the P. Classic. It was almost as if he didn't want to pass Collected. I'm not sure if that was definitely the case, I'm just not willing to side with a horse that might or might not be ready to call it quits.

If you're having trouble figuring it out, so am I. Maybe, it's Honorable Duty. Or, maybe, it's Keen Ice. What about Rally Cry? Neolithic, Mubtaahijj, Hoppertunity?

I think Gun Runner is a nice horse. I also think he's outclassed every horse he's faced this year. I also believe he's going to have trouble with Collected's speed. Then again, I could just be convincing myself not bet on the chalk. 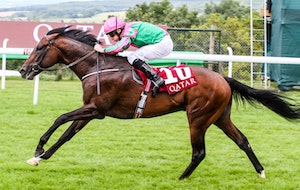 Churchill is Aidan O'Brien's top horse for the Breeders' Cup Classic. O'Brien must feel that Churchill's form and class trumps the fact that his breeding isn't close to being as conducive to " rel="noopener" target="_blank">success on dirt as War Decree's breeding.

War Decree's father, War Front, is from the Northern Dancer line. War Front's father was Danzig who has produced excellent grass and dirt runners. War Decree's grandsire on his broodmare's side is Street Cry.

Street Cry won the Dubai World Cup over dirt. He also fathered Street Sense who won the Kentucky Derby in 2007. War Decree should offer odds of 30 to 1 or higher. I think he's got a much better shot than Churchill because he's an unknown commodity that brings very good dirt breeding to the Breeders' Cup Classic.