2018 Kentucky Derby: How Much Does History Mean in Picking the Derby Winner?

There's no reason to believe that one, or both, don't run lights out on May 5. Okay, well, there is one reason. No horse has taken home the Kentucky Derby after not racing at 2 since Apollo did it way back in 1882. That's a long drought between 2-year-old winners. It makes the 37 year drought between Triple Crown winners that American Pharoah broke in 2015 look like the life span of a house fly.

Yet, Justify and Magnum Moon will go off as the favorites to win the 2018 Kentucky Derby. When it comes to the Run for the Roses, does history mean that much?

2018 Kentucky Derby:  How Much Does History Mean in Picking the Derby Winner?

In sports betting, trends are great trends until, well, they're no longer great trends. Check out a couple of Kentucky Derby historical trends that have been decimated in recent years.

Favorites are Bad Bets to Win the Kentucky Derby

No favorite had won the Kentucky Derby for something like 19 years. Then, starting with Orb in 2013, the trend got squashed. Orb won as the favorite. California Chrome in 2014 was favored. American Pharoah was a 5/2 favorite to win the Run for the Roses in 2015. 2016 saw favored Nyquist winning the roses. Then, last year, Always Dreaming went off as a favorite over Classic Empire. He too won the Derby.

If the favorites trend continues either Justify or Magnum Moon should win, right?

This used to be gospel. Without 3 Derby preps your horse supposedly didn't have enough of a bottom to run at a 1 1/4 miles. Dosage was a huge deal back in the 1990's. This all changed in in the 2000's when it turned out that two Derby preps are more than enough.

For a long time, many believed that prepping in the Florida Derby would lead to disaster. 5 to 6 weeks between races, the thinking went, was too many weeks.

The belief was so strong that in 2003 Bobby Frankel ran Empire Maker in the Wood Memorial after he had already won the Florida Derby. Empire Maker ran with a quarter-crack in the Kentucky Derby. 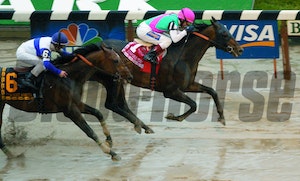 He finished second to Funny Cide. Too much racing? Maybe. That's why Bobby skipped the Preakness and then easily won the Belmont, preventing Funny Cide from the Triple Crown.

Big Brown in 2008, Orb in 2013, Nyquist in 2016, and Always Dreaming last year all prepped in the Florida Derby. None of those Derby winners had the extra prep between the Florida Derby and the Kentucky Derby.

No, seriously. Before American Pharoah in 2015, the belief was that no horse bred in Kentucky, or any other State in the Union, would ever win the Triple Crown because they were all soft. We saw what Pharoah did to demolish that thinking.

Now, we get to the historical trend at hand. It's true. The last 2-year-old to win the Derby was Apollo in 1882. But, like with all sports betting trends, there's a caveat here. First, how many horses that didn't run as a 2-year-old had a chance on Derby Day? Not that many. The reason is because you must prove yourself before making it into the Derby starting gate. Not only that, but running in the Kentucky Derby can cost you bigger paychecks down the road.

Finally, if your horse didn't run as a 2-year-old, how likely are you to push that horse towards the Derby? Again, not likely.
But, maybe, the 2-year-old trend is sort of meaningless because of the nature of horse racing. The reason sports betting trends mean something is because sports teams don't often go through wholesale changes. Tom Brady has been the New England Patriots' quarterback since 2003.

Every historical trend in the Kentucky Derby is sort of meaningless because the players are different every year. It's like trying to bet on the Patriots to cover the spread versus the Bills with both teams playing with a different roster each and every time.

That's impossible, right? How much does history mean in picking the Derby winner? Zero, zilch, zip. Anybody who says otherwise is providing the historical trend after the fact. That doesn't help us to pick the winner on Derby Day.