The Wynn Resort in Las Vegas released their 2018 Kentucky Derby odds. In this blog, I list the Top 5 betting interests. The Road to the Kentucky Derby is about to heat up. Many of us horseplayers have already gotten Derby Fever.

Although Bolt D'Oro failed to win the Breeders' Cup Juvenile, he remains the favorite to take home the Roses on May 5. Bolt D'Oro was sired by the great Medaglia D'Oro. He showed great promise as a two-year-old.

That's part of the reason I'm somewhat shady on his chances of improving enough to win the Kentucky Derby. He might be the next American Pharoah. He's already run like he is. At 15 to 1, he's a definite pass in my book, though.

Solomini makes the list because he has what it takes to be one of the top 3-year-olds in the nation. He reminds some of Real Quiet, whom his trainer Bob Baffert saddled to win the 1998 Kentucky Derby. Solomini has a ton of upside. Bob trains him for Zayat Stables, the same outfit that campaigned American Pharoah. He's sired by Curlin. His broodmare is Surf Song, herself a brilliant runner. Surf Song's sire is the legendary Storm Cat.

This sophomore is definitely one to consider at 30 to 1 odds.

Also sired by Curlin, Good Magic might just be that good. I remember asking my brother if I should put a future bet on American Pharoah even though his odds had gone down to 5 to 1. He told me that if I was going to take short odds on any horse, it was American Pharoah. I took the short odds and cashed rather handsomely when Phaorah won the Derby in 2015.

18 to 1, at this time on the Road to the Kentucky Derby, constitute short odds. I'm thinking of biting, though. Why? Think about it. Good Magic's mother is Glinda the Good, a Hard Spun broodmare. Not only that, but Good Magic is trained by Chad Brown, arguably the top overall trainer in North America.

He also won the Breeders' Cup Juvenile as a maiden. If he beat a bad field, I'd have been impressed. He didn't. He beat a deep, great, field. 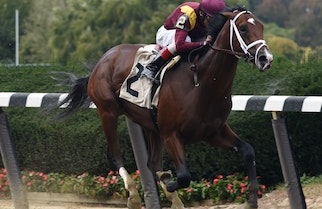 Trainer Todd Pletcher decided to skip the BC Juvenile with Montauk, the current third choice to win the Kentucky Derby.  Montauk is a Medaglia D'Oro sired 2-year-old. His broodmare, Indian Vale, is sired by A.P. Indy. This horse has a ton of talent.

Pletcher won the Derby with Always Dreaming. Montauk might not even show up in a race until February or March.
McKinzie  30/1

There's so much press on this two-year-old that he's offering odds of 30 to 1 to win the Derby even though he only has a maiden win to his credit. Sired by Street Sense and out of a Petionville broodmare, Runway Model, MicKinzie is also trained by Bob Baffert.

If you wish to see all odds, just Google 2018 Kentucky Derby odds + Wynn Resort. Who knows? You might find a big longshot worth keeping an eye on!
Racing
Loading...